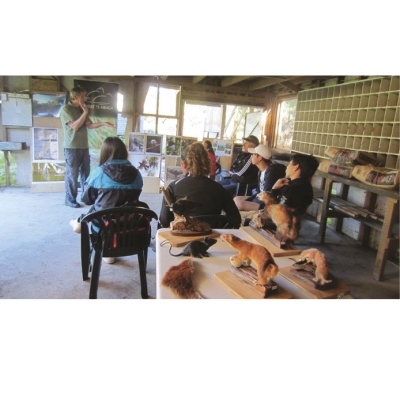 It links the Ark in the Park

Habitat te Henga; and the Forest & Bird reserve, Matuku so we called our newly purchased property, Matuku Link. Some of you may have helped our GiveaLittle appeal to purchase it and we took possession on November 1st late last year.

There are 37 hectares with three or four of those being alluvial flats including several scattered dock and buttercup ridden paddocks, irregularly divided by old riverbed meanders. In the meanders is a mix of tree lined open water with emergent baumea, extended raupo and swamp millet beds and carex, cyperus and juncus sedge patches. Peppered on the flats are remnant pukatea, kahikatea, kaikomako and totara.

Wasting no time, we held several working bees. Several truckloads of junk were taken away, scrap iron to the metal merchant, and  the house made liveable for our new resident  caretaker. A boundary line of poplar was felled and about a hectare of blackberry sprayed.

All internal fences were removed with the help of an obliging neighbour and the posts set aside for some future use – which manifested a mere month later. A group of 30 students from the Culver Academy, Indiana, touring through New Zealand wanted to be part of a conservation project. With a labour force that big, and four magnificent local carpenters, we constructed in two days 40 metres of boardwalk over a stream outlet on the Matuku Reserve.

Carrying tools, timber and a large generator almost a kilometre along the riverbank to the site, these energetic teens and their tutors  helped finish a project that had been on the to-do list for four years. Some of them also helped plant kahikatea, the first of many trees, shrubs and sedges that will convert the paddocks to an alluvial forest resembling that which once existed. Other intrepid travellers had arrived the week before and, unfortunately, their arrival coincided with Auckland’s mid March weather bomb. With the river some 3-4m higher than usual, turbulent and silt laden, the never-saydie elvers (young eels) all the way from Tonga were seen flick flacking over the flooded bridge.

The desire to enable this property, which has  easy access, to become a site for a wetland education centre has also rocketed ahead. The Trusts Community Fund Million Dollar Mission was opened on March 1 with several selected community groups competing to get votes from supporters for their projects. By the time the million ran out, Matuku Link had gained over 17,000 votes with each vote worth $5. The money will go toward material needed for the conversion of the barn while design and build will be a real=life project for Unitec students from the schools of survey, architecture landscape, and construction.

View the embedded image gallery online at:
https://ducks.org.nz/flight-magazine/item/62-makeover-at-matuku-link#sigProId2673a959c9
More in this category: « MB100 – a milestone for Pukaha Endangered native beetle »
back to top
We use cookies to ensure that we give you the best experience on our website.
I accept