A long road that doesn’t have a turn in it 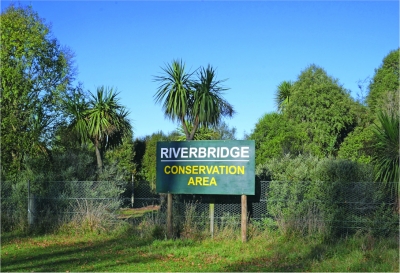 Farmer and conservationist Russell Langdon is philosophical about the recent flooding that swept through his property.

Russell Langdon, 89, has had his share of challenges at the wetland reserve he has established on his farm in Mid-Canterbury, near the South Branch of the Ashburton River.

The May floods were the latest hurdle. “The river broke out and came right through here. It flattened a few fences and damaged aviaries, but it’s nothing we can’t handle. The birds survived all right.”

He said the clean-up at Riverbridge, however, would take a long time. Riverbridge Conservation Park is an 8.3ha wetland habitat with half-a-dozen ponds and enclosures for native wildlife on Russell’s farm at Lagmhor, near Westerfield, southwest of Ashburton.

Among the birds he breeds are brown teal/pāteke and kākāriki. He used to breed whio but a freak snowstorm in 2010 put paid to that.

The whio enclosure was destroyed and the ducks were gone. The Department of Conservation removed Riverbridge from the whio breeding programme, and now it says Orana Wildlife Park and the Isaac Conservation and Wildlife Trust fulfils the requirements.

Russell has had plenty of run-ins with bureaucrats over the years – “they weren’t raised under a hen like me” but he takes it all in his stride. As he says, “It’s a long road that doesn’t have a turn in it”.

His land sits on top of an old river bed and the natural water level lies only a metre or so down, making it ideal wetland country. The land slopes east towards the sea “about 30 feet to the mile” so if you dig down and plug up both the eastern and western sides of the hole, a pond will form naturally. Russell grew up on a farm at Westerfield that his father bought after World War one, and so he only moved a short distance when he bought his farm at Lagmhor 40 years ago “when sheep were king”.

Russell’s stock numbers soon grew from 800 to 4000 and, along with a stint in the farm machinery business which involved a lot of travelling, selling mainly Case headers, he led a busy life. Riverbridge was just farm paddocks when Russell started transforming it into a habitat for waterfowl and other birds. It is now a fully formed wetland with ponds and native forest, mostly unplanned and planted to encourage wildlife to thrive.

Russell says his family were all great tree planters and he has planted 1000s of trees over the years.
Riverbridge started taking shape 21 years ago when Russell planted trees as a millennium project. “We made a lot of mistakes but who hasn’t.”

Among the trees on the property are matai, kahikatea, totara, cabbage trees, olearia, coprosmas, flax, kowhai and lacebark.

He says he still has a lot more trees to plant, with a hand from his brother John, two years his junior.

Just inside the entrance to Riverbridge is the old Westerfield schoolmaster’s house, built in 1888. Russell bought it in 1964 and relocated it to host school groups and tourists.

At the time, DUNZ had a South Island chapter, and Russell had had plans to use it as accommodation for DU members and other groups.

The walls are lined with information about wetlands, posters on endangered species and newspaper clippings about the park.
The wetlands start and stop in the property, so there’s no predatory trout, making it a safe environment for the critically endangered Canterbury mudfish.

Russell also has plans to introduce freshwater crayfish/koura into the wetland. The biggest pond is quite shallow, making it ideal for wading birds including pied stilts, spoonbills, and scaups and shovelers are also happy there. There’s marsh crakes too but they are hard to spot, and some buff weka.

Sharing the kākāriki enclosure at Riverbridge are a pair of Reeves’s pheasants though the male needs to be moved and Russell is not looking forward to that task. “If you go in there, he takes to you,” he says.

The lower part of the pāteke enclosure is covered in aluminium mesh which allows bugs in, but no predators.

The park is protected by a QEII convenant and it receives funding through grants applied for through the Riverbridge Native Species Trust. These days, Russell, who was awarded a QSM in 2006 for his services to conservation, says he potters around Riverbridge, leaving the farming to his nephew – and for now his focus is on cleaning up after the floods.

View the embedded image gallery online at:
https://ducks.org.nz/flight-magazine/item/419-a-long-road-that-doesn-t-have-a-turn-in-it#sigProId34c64412f9
More in this category: « Wairio on show Guide to planting a pond »
back to top
We use cookies to ensure that we give you the best experience on our website.
I accept