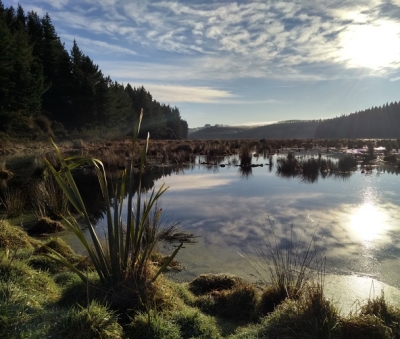 Trustees visited the wetland near the Taieri River during the annual meeting of the trust which was held in Dunedin.

It was the first meeting of the new board appointed by the Minister of Conservation in July. It consists of Andy Tannock, DU Board member Neil Candy, former DU president John Cheyne, Jan Riddell, Mark Sutton and Chantal Whitby.

The trust met to review 14 applications made to the trust for wetland projects across the country for 2020 – they subsequently approved 11 of the applications.
The award-winning Takitakitoa project has previously received funding from the trust.

Takitakitoa has been one of the largest wetland enhancement projects undertaken without extra funding help from non-Fish & Game sources. Otago Fish & Game was gifted the lower portion of the wetland in 1994, around 40 hectares, and later obtained the upper portion of the 70ha wetland, through a land swap deal.

The project was launched with a $50,000 grant from the Game Bird Habitat Trust which was largely spent on constructing a 350-metre bund so the valley floor,

which was drained in the 1960s, could be reflooded. This took about two years to complete. Otago Fish & Game Council also put funds into the project.

"It was basically taking 32 hectares of drained, failed farmland and turning it back into wetland," says Otago Fish & Game chief executive Ian Hadland. "Takitakitoa is a shining example of hunter funding being used for greater conservation benefit.

This is an ecological restoration project which has benefits for not just duck hunters, but anyone interested in enhancing or conserving natural habitat for the future."

As soon as water refilled the wetland, all sorts of wildlife turned up, species that had not been previously observed there while it was in its degraded state, he says. "There’s clearly conservation benefits there that even I didn’t expect. Some creatures turned up that I didn’t even know were in the neighbourhood … like the pied stilts. There are probably 30 to 50 that have moved in to live and raise their chicks."

However, Ian points out that mallard ducks and some other game birds have also colonised the area, and allowed for the wetland to be used for novice hunting in particular.

"Getting the next generation of hunters out there to appreciate wetlands and learn their value is important. Those young hunters will undoubtedly fund similar conservation efforts in the future." Takitakitoa is a project that Fish & Game can hold up as "a great example of a duck hunter-funded conservation project", he says.

For more about the wetland and how to apply for Game Bird Habitat Trust funding, go to: youtube.com/watch?v=JtpRBbp6t1w.

In December the Game Bird Habitat Trust was granted $360,000 over three years through the Government's One Billion Trees project.

The money will be used to establish plantings on projects that the trust
supports around New Zealand.

Trust chair Andy Tannock says this is a significant boost for wetland habitat projects and complements the trust’s goals.

Andy says the trust will be working on setting up a process to support the planting of natives such as flaxes and woody species at sites that have received the trust's funding support. Many of the projects are on private land.

Andy acknowledges the work of Dr Matt Kavermann, the senior fish and game
officer for Wellington Fish and Game Council who worked with the Ministry for Primary Industries to establish the grant.

View the embedded image gallery online at:
https://ducks.org.nz/flight-magazine/item/403-takitakitoa-impresses-trustees#sigProIde638c733c7
More in this category: « Gone fishin' and trapping What the Game Bird Habitat Trust does »
back to top
We use cookies to ensure that we give you the best experience on our website.
I accept