Local legend has it that the Wairio Wetland, located on the eastern shores of Lake Wairarapa, was once a paradise, providing habitat for substantial numbers of waterfowl and aquatic species.

The 132 hectare Wetland was adversely affected by the Lower Wairarapa Valley Development Scheme (LWVDS) during the 1960/70s which resulted in large areas bordering the Lake being drained and cleared of forest and sedges.
View the drone tour

The construction of Parera Rd which separated the Wetland from the adjacent Matthews Lagoon & Boggy Pond wetlands cut off critical water flows. Seed from willow trees planted in the upper reaches of tributaries of the Ruamahunga River for erosion control also invaded the Wetland. The resultant willow infestation was subsequently felled and bulldozed into parallel wind-rows, running east-to-west across the Wetland.

During the 1980s, following a growing awareness of the environmental effects of marginal land development, a planned "polder" scheme to establish dykes and further drain the eastern margins of the Lake, including the Wairio Wetland, was abandoned

The Conservation Act of 1987

The Conservation Act of 1987 passed responsibility for "stewardship" of the Wairio Block to the Department of Conservation (DOC). The objective was for DOC to hold such land for conservation purposes but in the interim, the block was leased to the Government owned Land Corp, for periodic pastoral grazing. 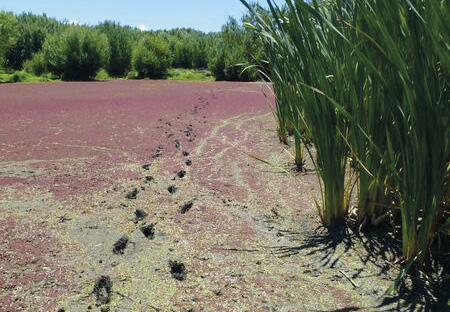 During the late 1980s, Ducks Unlimited New Zealand (DU) and DOC personnel attempted to partially re-flood the original Wetland. A channel was dug from the Lake on the north-western side of the Wetland and a flood-gate was installed.

At the southern end of the Wetland, a low earth dam was constructed. It was hoped that flood water from the Lake and surface water would be retained in the Wetland but particularly due to damage from cattle grazing these measures failed and both the flood-gate and dam fell into disrepair. 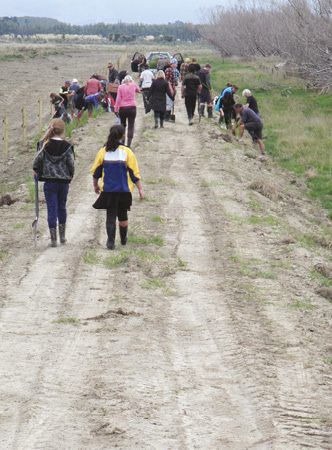 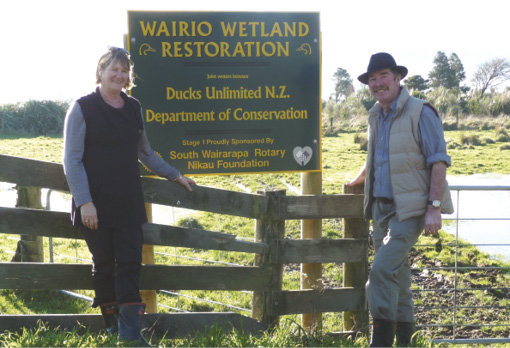 A long hard road with its fair share of triumphs and challenges.
Now the Wairio Wetlands Restoration project stands as one of New Zealand's
great ecological success stories

Restoration Day at Wairio May 21, proved to be a success with helpers like Ross Cottle, Ian Gunn and Tapuwa Marapara, who were able to share their expertise with those that attended

Recently over 25 supporters of the Wairio Wetland Restoration Project came together to plant over 2,000 sedges,flaxes, nurse trees and specimen trees.

During the last weeks of June, a band of enthusiastic Wairio Wetland members and other helpers were involved in more planting at the wetland.

The Wario Wetland has come in for some close scrutiny by Victoria University Student Bridget Johnson who is this year studying towards an MSc in Ecological Restoration.

A cheque for $6500 from the Nikau Foundation was handed over to Ducks Unlimited (DUNZ) President Ross Cottle and Patron Jim Campbell.

The Wairio Wetlands were on the list of for the 200 members of the New Zealand Farm Forestry Assn being hosted by the Wairarapa branch for their 55th annual conference.