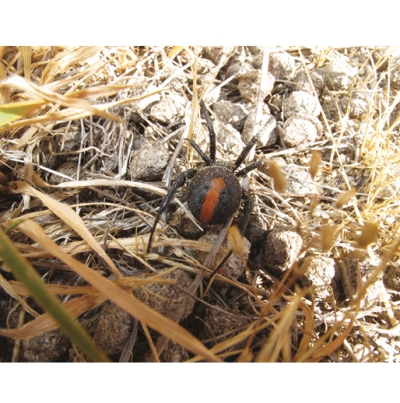 An “unholy alliance” between rabbits and Australian redback spiders is threatening the existence of an endangered New Zealand species, a study by AgResearch has shown.

Carried out with the Department of Conservation (DOC) and University of Otago, the study has illustrated the struggle for the ongoing survival of the Cromwell chafer beetle – a nationally endangered native species that can now only be found in the 81 hectare Cromwell Chafer Beetle Nature Reserve between Cromwell and Bannockburn, in Central Otago.

The study found numerous rabbit holes that shelter the rabbits were also proving ideal spaces for the redback spiders to establish their webs. Investigation of those webs in the rabbit holes found the Cromwell chafer beetle was the second-most commonly found prey of the spiders.

“Of course the rabbits and spiders aren’t actually plotting to bring about the demise of the chafer beetle, but these findings do give a fascinating insight into the almost accidental relationships that can  develop between species in the natural world, and how that can impact on other species,” said AgResearch Principal Scientist Dr Barbara Barratt.

“Otago University students doing research in the area found that 99 percent of the spiders had built their webs in the rabbit holes. We don’t know exactly how many of the chafer beetles there are left because they are not easy to find, but research into larval densities tells us the numbers are low. It does appear the redback spider, which has established populations in two locations in New Zealand since the 1980s, has been increasing in number over time, and this increases the risks for the beetle population.

“What we were able to show in our research was that filling in those rabbit holes was an effective way of eliminating the presence of the redback spiders at the treated sites, and therefore reducing the rate of the chafer beetle being preyed upon.

”As a result of the research, DOC has carried out a programme to break down old rabbit holes and hummocks in the reserve to destroy spider  nests, and also does regular rabbit control. An annual survey for beetle larvae with AgResearch will show whether these actions are having an effect.

“We will survey for beetle larvae next summer to see what effect reducing redback spider nests is having on the Cromwell chafer beetle,” said DOC Ecology Technical Advisor Bruce McKinlay. “Hopefully we’ll find the beetle population has increased with fewer falling prey to this introduced venomous spider.”

The Cromwell chafer beetle (Prodontria lewisi) is a large flightless beetle that lives underground in the sandy soils of the Cromwell river terrace. In spring and summer adult beetles emerge from the ground at night to feed on plants and to breed.

More in this category: « Makeover at Matuku Link.
back to top
We use cookies to ensure that we give you the best experience on our website.
I accept