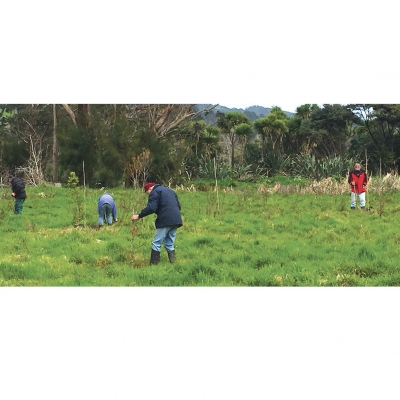 Trees going in: Rotary International’s call to plant a tree to mitigate against Global Warming was taken up by a group of local Rotarians who managed to do far better than just one tree and included 20-30 large sized kahikatea and pukatea. John Sumich

Having just returned from trip to Southern Africa where brown was in fashion, I was glad to visit our wetland and rejoice in the green of all the wetland and surrounding bush flora. A good year for white also with heketara and clematis splashing through the canopy.

Making my way quietly to the oxbow where I was hoping to see the [almost] resident pair of Pateke I was quite satisfied to instead observe a pair of shoveler, the male in his ruddy breeding colours.Circling upstream to check on some of our plantings of 2-3 months ago I was annoyed to see the billy goats Gruff , all three enjoying the lush spring grass but also no doubt the culprits that had ravaged some of the over 3,000 plants we have planted so far.Especially annoying was the loss of some maire tawake, but perhaps with Myrtle Rust now in New Zealand they are in jeopardy anyway.

Sedges and rushes, flax, kahikatea, the wet loving kaikomako and many other species all planted over several days by school groups, Junior Forest & Bird, Brownies, and volunteers. A group of Rotarians fulfilling Rotary International’s call for every Rotarian to plant a tree to mitigate against Global Warming, managed to do far better including 20-30 large sized kahikatea and pukatea

A large area of flax was planted where the previous owner had allowed a dump of some soil that unfortunately had gorse seeds. This was the only part of our almost year old purchase that had gorse and although sprayed out last summer, seedlings will spring up. However flax is impervious to the spray we can use to steadily eradicate the gorse seedlings and will ultimately shade out gorse.

Earlier in the month behind the newly planted flax in the small seep curling around to the oxbow, a bittern was seen so they are certainly utilising all of our Matuku Link property from west to east.

Good progress has been made on the nursery that will be providing the many plants needed to revegetate the 3-4 hectares of alluvial flat and that task will probably take 3-5 years. Downstream in the main part of the te henga wetland our trapping contractor often sees Pateke – but a more exciting report has just come through of another missing species.

With an invasion of Salvinia weed tackled by MPI two years ago, follow up monitoring on the water by kayak is ongoing. No Salvinia weed was seen in the latest monitoring but among the birds noted banded rail was listed. We are investigating this further as that species has not
been noted for decades following the collapse of the fitch industry and the local fitch breeder
merely releasing his animals into our valley.

If confirmed this will mean that all the rails are present as last year our audio monitoring picked up marsh crake in almost the same area. As a consequence of that we have beefed up our predator control with a line of Goodnature A24 traps along the shore line.

More in this category: « New hatchings at Pukaha Mount Bruce The new green scene »
back to top
We use cookies to ensure that we give you the best experience on our website.
I accept