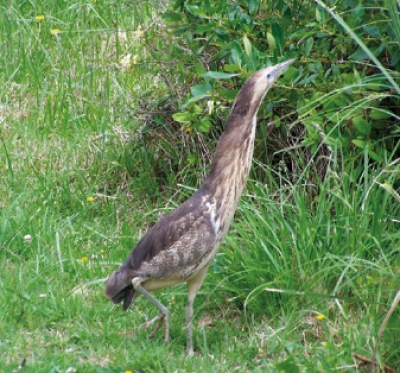 Bitterns are found throughout New Zealand - in the North Island they predominantly inhabit Northland, Waikato and East Coast wetlands; while in the South Island they mostly inhabit West Coast, Canterbury and Southland wetlands. The most important bittern site nationally is Whangamarino Wetland, a large and diverse wetland complex in the Waikato.

Bitterns are large, stocky birds, with streaky dark brown and beige plumage on their throat, breast, abdomen and thighs; and dark brown on the neck and back. The head is dark except for pale beige around the cheek, forming a pale eyebrow. Plumage can vary significantly and may be age related.

Bitterns are rarely sighted due to their exceptionally cryptic behaviour, inconspicuous plumage resulting in excellent camouflage and the inaccessibility of many wetlands. They are mostly active at dawn, dusk and throughout the night. Bitterns are occasionally spotted in the open along wetland edges, drains, flooded farmland and roadsides.

They are very sensitive to disturbance and will silently creep away to avoid detection, or adopt the infamous ‘freeze’ stance (with the bill pointing skyward) if approached. This allows bitterns to blend into many environments, whilst maintaining a close watch of surroundings. If an observer continues to advance on a bittern, then it will eventually take flight in a laborious manner.

Often the only sign of bittern presence in a wetland is the male’s distinctive booming call at the beginning of the breeding season. Each call sequence may consist of 1-10 individual booms, with an average of 3 booms. Boom sequences are repeated at regular intervals, and normally preceded with inhalations or gasps. Females are mostly silent, apart from producing an occasional ‘bubbling’ sound upon return to the nest, or a nasal ‘kau’ when alarmed. Bitterns in flight may produce a resonant ‘kau’ or ‘kau kau’.

The breeding season is extremely long, spread over a 10-month period. Females construct a reed platform nest amongst dense vegetation deep within wetlands.

A clutch of 3-6 eggs is produced between August and December (peaking in November), and then incubated solely by the female for 25 days. Chicks remain in the nest for 7 weeks and fledge from November to May. Bitterns are considered an indicator of wetland health, as they are dependent on the presence of high quality and ecologically diverse habitats, which are rich in food supplies (such as eels, fish, freshwater crayfish, aquatic insects, molluscs, worms, spiders, frogs and lizards).

Bittern numbers have declined drastically since the arrival of European settlers, with over 90 percent of freshwater wetlands now drained and cleared. Ongoing wetland degradation continues to be the chief threat, resulting in habitat modification and loss, reduced food availability and poor water quality. Other threats contributing to bittern declines include predation by introduced mammals (particularly cats, rats, dogs and mustelids), human disturbance of nesting bitterns, as well as power-line and vehicle collisions.

You can help bitterns by becoming involved in wetland conservation and reporting all sightings (or calls) to your local Department of Conservation office. Most importantly you can protect wetlands on your property by planting native vegitation to create riparian buffers and fencing waterways from livestock.

More in this category: « From the Editor Blue Rock shoot at Martinborough »
back to top
We use cookies to ensure that we give you the best experience on our website.
I accept