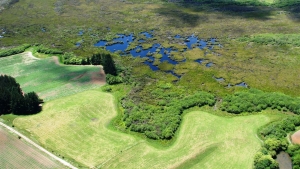 A seldom-seen carnivorous species has been found during a survey of rare plants at Waikato’s Whangamarino Wetland.

It’s been more than a decade since threatened plants have been surveyed at Whangamarino Wetland, with the last survey in 2009.

“We were particularly excited when we found Utricularia australis or yellow bladderwort, an aquatic carnivorous plant,” Lizzie Sharp said.

“We had several ID books out and a lively debate about whether it was yellow bladderwort or the invasive weed Utricularia gibba or humped bladderwort.”

leaves, and closer inspection revealed it was yellow bladderwort, which is known only in the North Island.

“Yellow bladderwort was found at one site in the 2009 survey, and prior to that, at 11 sites based on historic data.

“By 2009, 10 of those sites had been infested with humped bladderwort, and as more than 10 years have passed since that survey, we expected the worst ...”

The bog in the Whangamarino Wetland is treacherous so visits by the public are discouraged. There are no tracks into the swamp, but people are permitted on the Maramarua and Whangamarino rivers and Reao Stream.

For more information about Whangamarino Wetland and its biodiversity, visit: www.doc.govt.nz/our-work/freshwater-restoration.