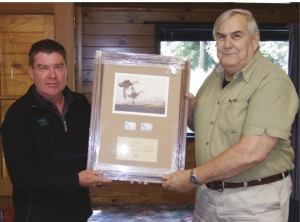 Ian Pirani received a Queens Service Medal (QSM) in this year’s Queen’s Birthday honours for services to conservation.
In 1974 Ian was a co-founder of Ducks Unlimited and was the first president of DUNZ through to 1980. During this time he and his wife Dawn initiated a Pateke breeding programme and nesting boxes for Grey Teal throughout New Zealand.
A former goat farmer who has given voluntary service to wetland preservation and other farm environment initiatives, Ian has contributed to conservation and the environment.
Early in his farming career Ian suggested to his employer to fence rather than drain a wetland. Later he and his wife established the largest water fowl collection in Australasia and were the first people to privately breed whio in captivity. He joined the Wellington Acclimatisation Society as a councillor in  1964, serving until 1972 and was a Councillor  on the National Acclimatisation for three years.
He is a strong advocate for the profitable live harvest of feral goats from indigenous forests for environmental reasons and for use as a meat export. Ian has served on a variety of environmental and farming boards including the Meat and Wool Board as a member of the Goat Advisory Group, on the Eastern Fish and Game Board, Bay of Plenty Goat Farmers Association, the Department of Conservation East Coast Board, and the National Trust of Balance Farm Environment Board.
Ian was a senior assessor and on the management committee for the BoP Ballance  Farm Environment Awards.
Ian has not been in the best of health lately, and DUNZ members wish him well.
Published in Issue 164
Tagged under
Read more...
Friday, 23 February 2018 07:34

Order of Merit for top bloke

Why has James (better known as Jim) Campbell been awarded the Member of New Zealand Order of Merit? Usually it is for achievement or service to the community  and for Jim Campbell mainly for services to conservation.

But there is more – read on.

The Order is awarded to those “who in any field of endeavour have rendered meritorious service to the Crown and the nation or who have become distinguished by their eminence, talents, contributions, or other merits”. That is our DUNZ Patron, our Jim.

There are few people of the Wairarapa who haven’t heard of Jim Campbell – and many well beyond. His reputation as a farmer, conservationist, wetlands creator, water fowl breeder and welcoming host, precedes him. At age 73, an age at which for many, signal retirement, Jim Campbell is constantly in motion – helping, giving, inspiring, leading and directing in the cause of environmental quality.

If ever an Honour was richly deserved; this is it – long overdue to an outstanding environmental role model.

Our Jim makes the media

and so he should…

Jim Campbell has been recognised for more than 50 years of service to conservation in the New Year Honours List.

Mr Campbell said he was humbled by the news.

“It’s huge. I’ll get used to it, I suppose. We knew the process was happening, it takes a couple of months. But it was a big lift.”

He has created many wetlands on his property, the largest being a 8ha area covenanted with the QEII National Trust, of which he is a life member.

He has been a trustee of the Masterton Henley Lake Trust since 2003 and has given more  than 60 years of support to the New Zealand Forest and Bird Society.

As trustee of the Mount Bruce National Wildlife Centre for 25 years, Mr Campbell was instrumental in promoting the building of the classroom facility, and the Sir Edmund Hillary Memorial Lectures.

However, Mr Campbell remained modest about his contribution. “A lot of people do more than I do, but when you start to add up what you’ve done it does get to be quite impressive at times,” he said. “It was a team effort and that goes for a lot of things.”

His passion for conservation was sparked as a child, when he took rides on the mail truck and visited the aviaries on Elwyn Welch’s farm. “I’ve always been interested in that sort of thing, and I was probably encouraged by Elwyn Welch who was one of the pioneers who had a farm where Pukaha Mount Bruce is now.”

Jim has racked up a number of other accolades including a Wellington Regional Council inaugural Ballance Farm Environmental Award.

Winners of the 2015 Seabird Smart Awards have changed the behaviour of their entire fishing fleet to ensure the wellbeing of seabirds.

Bill Mansfield, chair of the Southern Solutions Seabird Trust, pointed out that New Zealand had an international responsibility to ensure the long term survival of seabirds.

Tom Searle, operations manager of Leigh Fisheries and Mike Black of Talley’s were the main winners. Both have instigated significant change on vessels in the way engagement with seabirds is managed and in raising awareness of the impact of fishing on the birds.

The Southern Seabird Solutions Trust is a collaboration between seafood industry  representatives, the Government, WWF-New  Zealand, Te Ohu Kaimoana and recreational anglers to ensure a sustainable future for fishing. 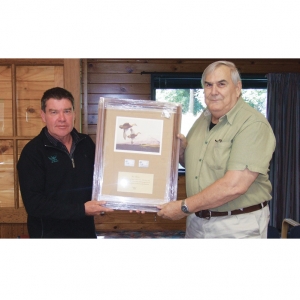 Published in Issue 173
Tagged under
Read more...
We use cookies to ensure that we give you the best experience on our website.
I accept