Mallards in focus – and still under threat 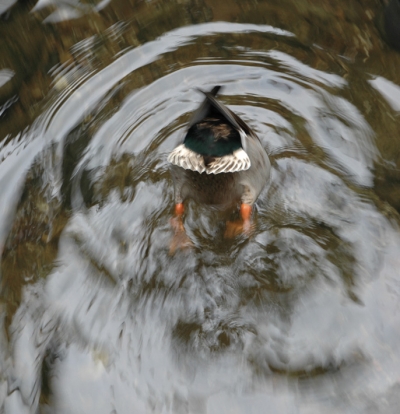 Bottoms up: A Mallard drake getting dinner the hard way. Liz Brook

There is an erratum that is worth mentioning – in regards to the shallow ponds being most used by broods. The shallow ponds are all less than 43cm deep. This is the depth that is recognised in literature as the maximum depth adult mallards can reach when tipping up to feed (Phillips 1923 & Olney 1960 in Perret 1962).

Additionally, staff  have now completed sifting through the 250,000+ photos from our ‘Operation Duck Pond’ study. As anticipated, ponds in Southland that were used most often by broods had the following attributes:

This upcoming mallard breeding season the game cameras will be placed throughout the landscape aiming to capture images of mallard nest predators, namely stoats, ferrets and feral cats. This will be combined with a heavy trapping regime and monitoring of nests within a marked study area. We look forward to reporting on our results!

And -Yeh – looks like the same cat,  obviously included the pond in its circuit – have a dozen photos where you can just see the ears and head in the grass, where it obviously just sat and watched for ages! (Camera was set on time lapse, taking photos every 5 minutes).

More in this category: « DUNZ member honoured for conservation work Why – that is the question »
back to top
We use cookies to ensure that we give you the best experience on our website.
I accept