History made on Stewart Island 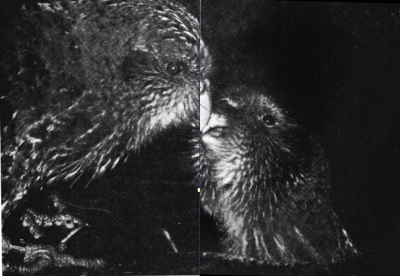 For the first time in living memory, men watched while the Kakapo population increased by two. The wildlife team on the island described the find as ‘mind boggling‘.

The N.Z. Wildlife Service team have good reason to pat themselves on the back. Since 1977. when they discovered a community of thirty of the rare birds on Stewart Island. they‘ve been working hard to preserve the species.
The discovery of the two chicks was an indication of how important the team‘s work in eradicating pests. tagging and studying the birds has been.

The Kakapo needs your help too.
The wildlife team. whose good work became so evident recently. need somewhere to live while they study and protect the Kakapo. The World Wildlife Fund has set the Project Kakapo target at $25,000 to build and equip a hut with basic living and research facilities.

Because all materials must be ?own into the remote and rugged regions of Stewart Island by helicopter. the cost of construction will be high. But it’s the ?rst step on the road to survival for this unique and delightful New Zealand bird.

Build the hut or see the Kakapo fade into myth — the choice is yours.
Support Project Kakapo.
Less than a hundred Kakapo remain — a bare few in Fiordland. and the small colony in almost inaccess— ible parts of Stewart Island.
The Kakapo’s survival is dependent on your support.

The World Wildlife Fund has committed $25.00( to supporting the Kakapo, it needs your help to raist the money.
Without your help the Kakapo will die.
How much do you know about the Kakapo?
Probably next to nothing, because little is known even by trained naturalists and researchers, about it: life cycle, its habits, its rituals. its young — even its life span.
The Kakapo is as big as a goose, booms like 2 bittern, climbs trees, digs holes and looks very like at owl. The bird remains one of nature’s riddles. Flight less, nocturnal, the Kakapo is the world’s biggest ant strangest parrot, it has a separate sub—species classifica tion all of its own.

With moss green body feathers and bronze wings, the Kakapo waddles as it walks. It looks for all the world like a plump and stumpy Charlie Chaplin as it beats feeding tracks across dense scrubland in southern Stewart Island.
Tearing moss and grass roots from the boggy, peaty ground, its food is held in long claws and nibbled with a powerfully hooked beak.
But for all its apparent armament, the Kakapo is a placid, docile creature, certainly no match for the killers of the bush,
Wild cats and dogs maintain a reign ofterror. Mauled skeletons of members of Stewart Island’s
Kakapo community are sad relics of the havoc caused by predators imported by the early Pakeha settlers.

The New Zealand Wildlife Service team will send their specialist in wild cat eradication, to Stewart Island — but like other members of the team, he needs shelter. The donation you make will house this man and others like him, who may need to spend up to ten years studying, learning and keeping the last Kakapo colony in New Zealand alive. The current research team is living under canvas in conditions of extreme hardship in the same remote corner of the island where the Kakapo have been herded.

To keep the research team the Project Kakapo hut mustd be built. Otherwise the Kakapo cannot be protecte .

Where do I send my donation?
Please help save the Kakapo by sending a cheque, postal note or money order to:
Project Kakapo
World Wildlife Fund
P.O. Box 12-200
WELLINGTON NORTH

A receipt will be posted to you — and all deductions of $2 or over are tax deductible within the prescribed limits. The money you give to Project Kakapo will be used only for Project Kakapo.
The Kakapo will live —- with your help — if given now.

More in this category: « Guest Speaker Sir William Gilbert Report on Operation Branta (Canada Geese) »
back to top
We use cookies to ensure that we give you the best experience on our website.
I accept