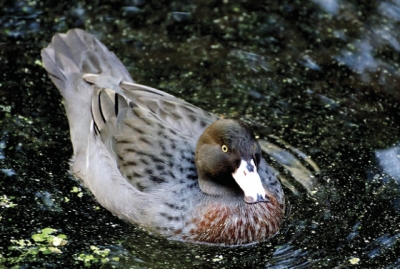 The Department of Conservation has high hopes for the upcoming whio breeding season in Fiordland. About 64 breeding whio were found earlier this year in a survey of a security site for the blue ducks.

Senior ranger Andrew (Max) Smart says this means the northern Fiordland site is the first in the South Island to exceed the target of 50 breeding pairs.

“Security sites are the highest priority whio conservation areas in the country; there are four in the North Island and four in the South Island.

"The target of 50 breeding pairs is set for each security site through the Whio Recovery Plan. A couple of sites on the North Island have reached this target, but we’re the first confirmed site on the South Island to do so.”

Whio have come a long way since 1999/2000 when only three pairs were found in this security site, Max says. “This year’s number is only a minimum and there could be up to another nine pairs.

“Extended trapping efforts and landscape scale predator control have enabled the whio here, and at key sites around New Zealand, to make a strong comeback.”

Exceeding this target is great news for whio, but according to Max, there is still a lot of work to do to secure a future for this species.

“We are only doing work over a relatively small area and this is where we are making a difference. Predator control has to be kept up and expanded for whio to have a chance to increase in number and spread over their natural range.”

More in this category: « Fish deaths call for relocation project rethink GIVEAWAY »
back to top
We use cookies to ensure that we give you the best experience on our website.
I accept