Southland has long been recognised for its duck population and the associated buzz around the district during the first weekend in May!

However, the combination of several poor mallard breeding seasons in a row and in response to hunters concerns about the struggling North Island population, the Southland Fish and Game Council funded a national mallard research project. I was fortunate to have my Master’s research funded as part of this wider project.

The Southland Council had expressed concern about continual dairy conversions and the associated changes in pasture management that might affect duckling survival. Consequently, for my research I focused on female habitat selection and factors that may impact duckling survival.

In terms of pasture management, I found that duckling survival is comparable between dairy and sheep/deer pastoral grazing systems. This is good news for mallards in Southland, as we readily see our landscape convert to dairying systems. However, first and foremost, broodrearing females in Southland are selecting for ‘unmanaged habitat’ i.e., everything that is not pasture (hedgerows, shelterbelts, rank grass). This may not seem like an unexpected result, but alarmingly, these types of habitat are associated with lower duckling survival.

In our landscape, these habitats are typically thin and linear in configuration, creating ideal travelling corridors for predators. While broods may feel safe and protected tucked up in a hedgerow, predators that rely on their olfactory sensory system to track prey can easily run along the downwind side of these strips and pick up the scent of a sitting duck.

Additionally, I found that duckling survival is reduced for broods that spend their time closer to houses and roads, with both being structures that tend to be associated with a higher predator presence. Over the two year study period, 15-25 percent of our breeding females were killed on the nest by predators. To put this figure in context, this is similar to the proportion that we, as hunters, shoot each year. Further, an additional 30 percent of nests last season were abandoned or destroyed due to predators. At necropsy (post mortem examination), many of these females had evidence suggesting both mustelids and cats were the main perpetrators. While more research is needed, these results suggest that predators are having a much bigger impact on our mallard population than we originally suspected. Luckily, predator abundance is a factor that we can all influence. Further, in reducing the predator guild, you may be surprised in what other wildlife you attract!

After chasing ducks through the 2014  breeding season, staff noticed definite differences in ponds that were used by ducks and broods. Consequently, over the 2015 breeding season, we deployed 21 game cameras on ponds throughout the region that captured images every five minutes during daylight hours. If you do the math, that means I have roughly 250,000+ photos to wade through! As a result, I have not quite made it through all these photos to run the analysis. However, I can make a few comments on factors that seem to have an impact on the ponds I have made it through thus far.

Typically, the shallower ponds with plenty of feeding bottom (at least 43cm deep) have had hundreds of headless, ‘bums-up’ photos. Another example is a pond that only has water in it during the breeding season. These seasonal bodies of water tend to be the most productive in terms of invertebrate presence, and this may flow through into brood use. In last year’s study, I found that the presence of ephemeral water (short-lived bodies of water) during the first 10 days of a ducklings life, had a huge impact on survival. For Southland, cumulative duckling survival to 30 days of age without ephemeral (lasting only a short time), water present was only 11 percent for broods raised by yearling females compared to 26 percent for broods raised by adult females. However, with the presence of ephemeral water, duckling survival dramatically increased to 28 percent for broods raised by yearling females and 46 percent for broods raised by adult females. Initially, ducklings require a high protein food source, which is readily available in ephemeral water, particularly in the form of earthworms that are forced to the surface. Hence, this may be why Southland is recognised as a duck factory, and as duck enthusiasts, we shouldn’t be complaining about the weather! Consequently, management of pond water levels to mimic a seasonal body of water might be one way to encourage duck use of ponds.

Another observation that might be important to brood use is the degree of exposure of the pond to the elements. The more barren-like ponds lacking any edge, bank, or overhead cover tend to have very limited use by any mallards, and none by broods. It will be interesting to see what factors come out of the data, but my gut feeling is pond use by broods is a combination of factors that create a sheltered, food-laden haven…. Watch this space! After chasing ducks through the 2014 breeding season, staff noticed definite differences in ponds that were used by ducks

Mallards in focus – and still under threat 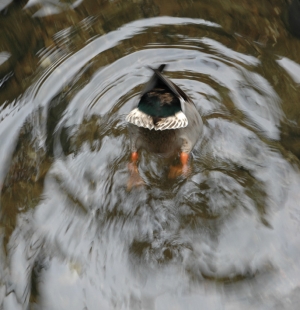 There is an erratum that is worth mentioning – in regards to the shallow ponds being most used by broods. The shallow ponds are all less than 43cm deep. This is the depth that is recognised in literature as the maximum depth adult mallards can reach when tipping up to feed (Phillips 1923 & Olney 1960 in Perret 1962).

Additionally, staff  have now completed sifting through the 250,000+ photos from our ‘Operation Duck Pond’ study. As anticipated, ponds in Southland that were used most often by broods had the following attributes:

This upcoming mallard breeding season the game cameras will be placed throughout the landscape aiming to capture images of mallard nest predators, namely stoats, ferrets and feral cats. This will be combined with a heavy trapping regime and monitoring of nests within a marked study area. We look forward to reporting on our results!

And -Yeh – looks like the same cat,  obviously included the pond in its circuit – have a dozen photos where you can just see the ears and head in the grass, where it obviously just sat and watched for ages! (Camera was set on time lapse, taking photos every 5 minutes).

Published in Issue 168
Tagged under
Read more...
We use cookies to ensure that we give you the best experience on our website.
I accept