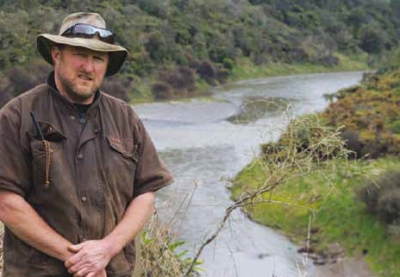 One of our DUNZ directors featured recently in an issue of the National Farming Review. That person is Dan Steel of Blue Duck Station. The writer was none other than Lou Sanson, Director-General of the Department of Conservation.
Dan was eager to point out that Blue Duck Station is 100 percent effective. Every square metre does its bit for biodiversity in one way or another, be it pasture, native bush, wetland, river bank or the sites housing beehives.
Mr Sanson says DOC cannot achieve all its conservation targets alone and he therefore considers Dan Steele as one of the enthusiasts contributing to DOC’s 2025 targets for pest management and attracting international visitors. As most DU members will know, Dan has his own freehold property along with a family lease that covers 2800 ha. This farmed area carries 5400 breeding ewes, 1000 hoggets, 100 deer, 330 breeding cows and 470 other cattle.
However it is the blue duck (Whio) and kiwi populations on which Dan has focused efforts for the last 10 years. After losing a brood of ducklings he quickly set about organising an efficient pest control programme. Pest control is only part of the answer as flooding streams and rivers mean the Whio nests and eggs can easily be washed away. Dan recovers eggs and sends them to incubate at nest egg facilities. After hatching they go to DOC’s blue duck hardening facility at Turangi, and eventually return to the river. Dan said the Whio are still only holding their own, though kiwi numbers are increasing.
(The above material are excerpts from the original story in the December issue of National Farming Review,
written by Lou Sanson, Director General, DOC).
Read 1598 times Last modified on Tuesday, 31 October 2017 09:17
Tweet
Published in Issue 170
Tagged under

More in this category: « Photo Competition Hard Work at Boggy Pond »
back to top
We use cookies to ensure that we give you the best experience on our website.
I accept