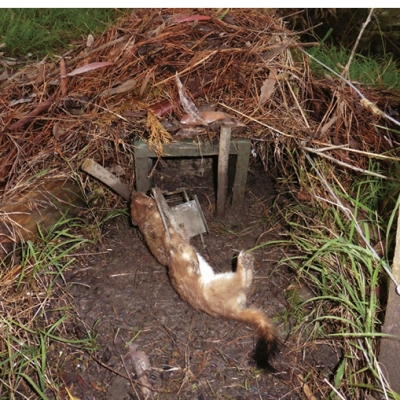 For those of us with access to habitat, trapping is one very positive way we can tip the odds in the favor of native birds. So why would Britain’s Brexit have anything to do with such important work?

The EU along with Russia and Canada signed up to AIHTS, the Agreement on International Humane Trapping Standards. This binds all member states and Britain was, until Brexit, one of those. The AIHTS agreement is only based on commercial fur-bearing species, and none of the small vermin trapped by British gamekeepers has a commercial value. However stoats in some of those colder signatory countries are commercial when their pelts turn white in winter. These are then known as ermine. This fur has long been used to trim expensive royal robes and similar. While British stoats, (and their NZ descendants), will sometimes turn white, often it is usually only a partial change. So this species has little or no commercial value in Britain which has always imported the ermine it needs. However this collective AIHTS agreement means that Fenn and also body-grip traps, (known in NZ as Conibears), will shortly no longer be approved to catch stoats in the UK. They’re still perfectly legal for weasels and rats, but how do you keep a stoat out of a trapping tunnel set for one of the other species?

The AIHTS agreement might have already put paid to the Fenn and body-grip traps in the UK but Britain successfully negotiated a two year extension, (expiring July 2018), to allow authorities there to find and test suitable alternatives. Brexit also raises the possibility that common sense may again apply. Interestingly the DoC and Goodnature traps made here in NZ are among alternatives, albeit the weight, bulk and expense of these means they are not a direct replacement. But why would the Fenn trap, which has been the gold standard since 1959, fail to meet the new requirements?

Fenn traps work by breaking the backbone of an animal whereas DoC traps inflict a blow to the head. The latter is more or less instant death but the Fenn is sometimes less instant depending on how the animal is caught. In early Fenn trap trials inventor Alan Fenn determined that tunnel height is critical. The animal must not be thrown clear of the trap but must hit the roof and be held there while the traps closes on it. Nor can the tunnel be too low or the trap will expend its energy hitting the tunnel itself, (keeping in mind that the traps tends to jump perhaps 20mm when sprung off). Traps must be recessed and level with the ground and also snugged into the soil, so the animal enters the stable trap straight-on. If used in a wooden trap, the floor needs to be built up level with the trap plate to achieve the same direct animal orientation over the plate. Universal black plastic trap covers in NZ have always been made to fit the larger Mr6 Fenn, not the Mk4. So they are not at all ideal in any critical test. Lastly Fenn traps should be set fine not hard. It is not clear if any of these requirements were factored in to NZ humane trap testing. If just 1 in 20 animals fails to die instantly and takes a minute or so to clinically expire in a Fenn trap, the new standard is breeched. But were all 20 out of 20 traps set wrong?

In this country the stoat was introduced from the UK and also has no commercial value. It is however associated with the decline of many of our iconic native bird species including kiwi especially and also waterfowl. Brown teal, for instance, walk directly to their nest, (rather than fly), which soon leaves a trail that no stoat walking around a pond could miss. This species was one of our most common waterfowl in NZ but soon after the arrival of mustelids, (stoats, weasels and ferrets), their populations collapsed. To this must also be added the destruction of habitat and other factors, but clearly the welfare of stoats in NZ is probably not our highest priority. Or is it?

DoC have recently withdrawn all their thousands of Fenn traps from the field and replaced these with DoC 200, 250 and similar traps to meet new humane standards. Yet DoC use aerial 1080 poison in NZ on a massive scale. This can take up to 18 hours to kill a stoat even in ideal laboratory conditions, so it seems very odd that we should be concerned that 1 in 20 stoats might take a minute to be clinically dead in a steel trap. Perhaps being terribly concerned with traps is a way of offsetting apparent indifference about the wide scale use of aerial poisoning?

What all this means to us kiwis is that the future supply of Fenn traps from the UK is far from assured. This author has spoken to the manufacturer of them in Redditch, who obviously is a worried man. So it would seem that the NZ Government’s goal of a Predator Free NZ in 2050 is off to a very bad start if the standard tool of the British gamekeeper is about to become consigned to museums.

Whether the new DoC and Goodnature traps can be made to do the same job as the Fenn remains to be seen. But if using DoC traps, can I suggest that, if you want to keep playing the piano with a full compliment of fingers, be extremely careful and use the correct safety that should be supplied. At least one Department of Conservation worker was allegedly rushed to hospital having nearly bled-out but for the quick thinking of their work companion.

It is reputed that the cook on Captain Cook’s ‘Endeavour’ had a deal going with the ships cat. He’d let it in the ships hold to catch the rats there, which the chef would cook and eat the rear part of, the cat got the rest. On long voyages, this would have been the only fresh meat available and apparently he thought that with some pepper it tasted quite OK. So there’s an option… if meat is scarce.

View the embedded image gallery online at:
https://ducks.org.nz/flight-magazine/item/27-trapping-vermin-and-brexit#sigProId0876fd1c45
More in this category: « 2017 AGM/Conference The need for continual predator control »
back to top
We use cookies to ensure that we give you the best experience on our website.
I accept