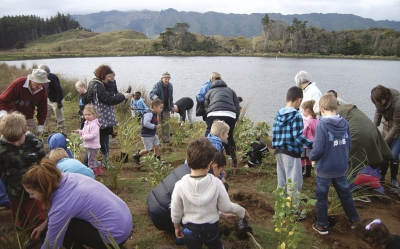 Seven classes from Waikanae and Kapanui Schools were ‘eager beavers’ on Friday June 6, when around 1700 plants were planted on the west margin of the northern pond at the Pharazyn Reserve wetland near Waikanae.

The two local schools have been involved for some years now and the planting is a popular activity with the students.

This latest planting complements work done in previous years in the programme to re-habilitate a wetland margin around the former oxidation ponds for Waikanae that were de-commissioned in 2002.

To date approximately half of the margins have been planted over the last seven to eight years. The earlier plantings are doing extremely well with a number of the students proudly pointing out where they had planted in previous years.

More in this category: « Presidents Report AGM 2014 WetlandCare Australia restoring Little Llangothlin Lagoon »
back to top
We use cookies to ensure that we give you the best experience on our website.
I accept