Where are the swans?
Royal swans are on the wane and DU Director Will Abel wants suggestions about getting hold of some breeding stock. Please contact Will on 06 362 6675.

From next year, Flight magazine will be published three times a year in February, June and October. Submissions of stories, photos, story ideas and suggestions should be emailed to Alison Murray at This email address is being protected from spambots. You need JavaScript enabled to view it..

DU rep appointed
Director Neil Candy has been appointed as a member of the Game Bird Habitat Trust Board, which distributes funding to develop and enhance the wetland
habitats of game birds and other wetland inhabitants. He attends his first meeting as a board member this month in Dunedin where 12 applications for funding will be reviewed.

What's on the telly
DU directors Dan Steele and Jim Law both appeared on TV in August. TVNZ's Matty McLean was given a tour of Blue Duck Station by Dan on the Breakfast show, and Jim and Marilyn Law's Palliser Ridge Station was featured on Country Calendar.

This episode can be watched online at www.tvnz.co.nz/shows/country-
calendar/episodes/s2020-e23 though you may need to sign up first (it's free).

New Zealand Geographic has an extensive online feature on wetlands. Go to www.nzgeo.com/stories/wetlands.

Catching up the swans 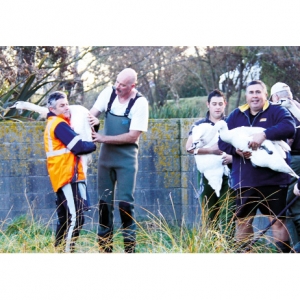 There is something majestic about Mute swans as they glide gracefully on the surface of a lake, no wonder they are in great demand.

Swan Upping* has been an annual event for Ducks Unlimited for about 28 years with some members travelling quite a distance to take part in “catching up the swans”.

This year Ross Cottle and Jim Campbell brought seven swans north. Back in the North Island they collected all the birds that DU members have reared (in total 17) and they were taken to Ross’s place in Masterton to sort into breeding pairs for distribution to members who want them.

Catching the swans is called Swan Upping short for catching up the swans.

Two Cape Barren Geese were caught up in this event. They are Grey Geese  native to the southern coast of Australia called Cape Barren. They have black feet, pink legs, a blue grey body and lime green beak. They have gone to long time DU member Mike Burke in northern Manawatu.

*Swan Upping is an annual ceremonial and practical activity in Britain in which Mute swans on the River Thames are rounded up, caught, marked, and then released.

Traditionally, the Monarch of the United Kingdom retains the right to ownership of all unmarked mute swans in open water, but only exercises  ownership on certain stretches of the river and its surrounding tributaries. This dates from the 12th century, during which time swans were a common food source for royalty. Swan Upping is a means of establishing a swan census and today also serves to check the health of swans.

Having their own water feature right in front of their home is a rewarding and entertaining result for hard work for Steve Clarkson and Lyn Watson.

Several years ago they built their attractive home that sits right on the edge of their main pond, and now after years of toil they have a  grand vista as a backdrop to their everyday living.

Just last year they acquired two Mute Swans. The pair settled in well, and add another interesting touch to the scenery. With luck there will be more than two white swans on that pond.

Steve and Lyn also run a few black and coloured sheep and Lyn takes full advantage of  using their wonderful wool to make a variety of garments and useful items.

Published in Issue 166
Tagged under
Read more...
We use cookies to ensure that we give you the best experience on our website.
I accept