There was a slow start to the New Zealand shore plover/tuturuatu breeding season, most likely due to the severe winter. The Isaac Conservation and Wildlife Trust said three out of four NZ shore plover pairs are breeding. The fourth pair had not bred last spring, due to a grumpy male.

The first clutches had been lifted for artificial incubation, with eight chicks hatched. Two second clutches have been lifted, with another  due shortly. The third clutches will be left with the pairs to rear.

Chicks will be directly transferred to offshore island holding aviaries, rather than to Trust aviaries, a new move to minimise dispersal, due to protect hatch site. Department of Conservation monitoring on Waikawa/Portland Island recently reported five pairs on eggs and one pair with a chick.

Photographed (left), a recently hatched critically endangered shore plover chick as it checks out its brooder box surrounds on the hunt for tasty mealworms. Shore plover are one of New Zealand’s very rarest of birds and are one of the world’s most threatened waders. They continue to be on the brink and captive breeding efforts are essential in creating and maintaining translocated offshore island populations.”

Shore Plover:
26 chicks were raised with some released at Waikawa and some at Motutapu. Four remain at Pukaha to continue with the breeding programme.

Pateke:
18 ducklings from the two breeding pairs at Pukaha. These were sent to the pre-release site, Peacock Springs near Christchurch, before they are released into the wild.

Whio:
2 male and 1 female ducklings hatched and reared by a pair at Pukaha have been sent to the pre-release site at Turangi. 13 ducklings were hatched from eggs collected from wild sites and of these 9 are male and 4 are females. They will remain at Mt Bruce Pukaha. 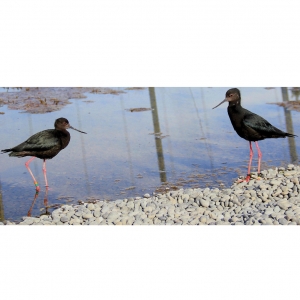 The 2017/18 breeding season has begun and The Isaac Conservation and Wildlife Trust (ICWT) once again reached its busy rearing phase.

ICWT is happy to report that three clutches have been incubated by critically endangered orange-fronted parakeet breeding pairs, as well as eight healthy chicks presently being raised. (see page 9).

ICWT’s reptiles are becoming more active with the warming weather, meaning tuatara,  Otago skinks and grand skinks will be breeding as well.

As always, ICWT’s ambitious native planting  programme across the Isaac Conservation Park and the Otukaikino River restoration site continues; while salvaged historic buildings continue to be restored to their former glory in the Heritage Village.

Published in Issue 173
Tagged under
Read more...
We use cookies to ensure that we give you the best experience on our website.
I accept