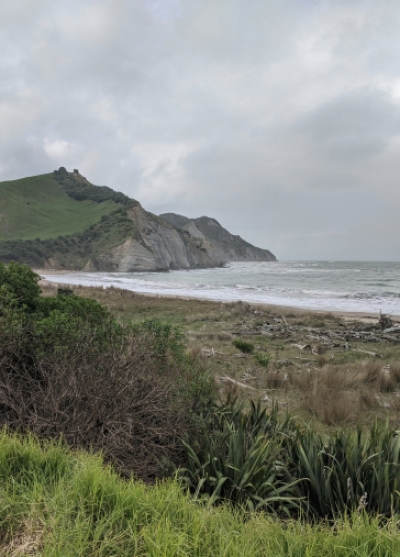 Young Nick's Head.
'They said we couldn't do it'

About 60 tuatara were translocated from Stephens Island in Marlborough Sounds, and now, safe within the fence, their numbers have grown to more than 100.

There are also about 180 nesting gannets, about 55 to 60 grey-faced petrels, sooty and fluttering shearwaters and even an arctic skua has been seen within the fence.

"Initially, they said we couldn't do it," Sandy says.

To attract the seabirds, Steve smothered the rocks with white paint to look like guano and installed a sound system to replicate the calls of various seabirds. The gannets have been nesting there for several years now.

Sandy says there are plans to translocate saddlebacks and giant weta. He has also been involved in translocating pāteke to the wetland and about 200 have been released. He says they are now moving around the region and another survey of bird numbers is due but it is clear the pāteke are doing well.

Sandy told DU members that he was well aware of the wealth of knowledge within DU and members' involvement with wetlands around New Zealand.

He says Gisborne is desperately short of wetlands. The biggest is Lake Repongaere, covering about 110 acres. "There are farm ponds all over Gisborne attracting wildlife but we are very short of big wetlands. This one [at Nick's Head Station] is a joy to behold."

Some of the visiting and resident birds:

View the embedded image gallery online at:
https://ducks.org.nz/flight-magazine/item/390-mission-impossible?tmpl=component&print=1#sigProId79b6e92837
We use cookies to ensure that we give you the best experience on our website.
I accept