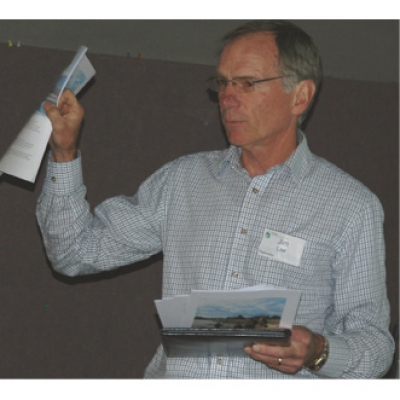 Jim Law explained what is happening at Wairio Wetland in the southern Wairarapa when he presented the following at this year’s AGM.

During 2012/2013 restoration work increased significantly and the research programmes by Victoria University’s Wellington School of Biodiversity and Restoration Ecology were  expanded to include nutrient studies and  hydrology.

However, of greatest interest are plans we have been pursuing for some time to reticulate water from the neighbouring Mathews lagoon (and possibly boggy Pond), under the Parera Road and into the Wairio Wetland. This would be a great boost to the health of the Wetland and assist in stripping nutrients before the  water finally reaches Lake Wairarapa.

This year’s increased work cost just over $25,000 (prior year $15,000), and was once again financially supported by the Nikau Foundation, Rotary, the Pharazon Trust and the Ron Greenwood Trust and the Estates of two former DU members, Bruce McKenzie and Ron Brookes. Greater Wellington Regional council also contributed funds received under the Government’s “Fresh Start for Fresh Water” programme. In total third parties contributed $15,000, with the balance of $10,000 coming from DU resources

For the 2013/2014 year we have an even higher budge of $35,000. Key items include our normal planting, led by DU’s Trevor Thompson and again involved a number of our stakeholders, notably pupils from the local Martinborough School, students from the Taratahi Agricultural Training Centre, Rotarians and other interested parties,  including of course, DU members. Good local media coverage was provided by Gill Lundie, the Wairarapa Chapter Chair. Further planting is planned for late August brings the total for the year to 4000 plants – a record!

The other main 2013/2014 item that has been completed is the construction of a bund wall around the western side of Stage 4 that has  retained significant water in the Wetland. Wairio is no definitely being seen as a success story by the wider community and DU’s  profile has grown accordingly.

More in this category: « Catching up the swans The birds’ place – the Ahuriri estuary »
back to top
We use cookies to ensure that we give you the best experience on our website.
I accept