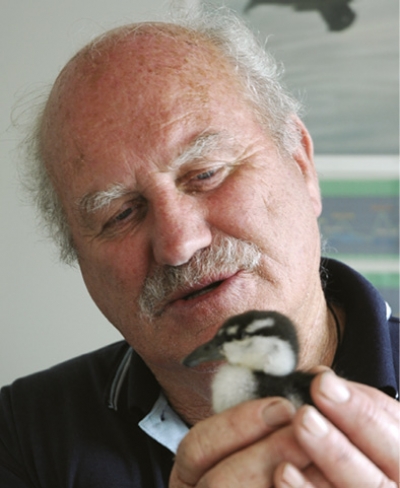 In safe hands: Peter Russell, Palmerston North aviary keeper, with a whio chick that has since matured and been released. Liz Brook
A successful breeding season for whio included 16 juveniles that arrived safely in the North Island from Peacock Springs. They were collected from the airport by DU member and Palmerston North aviary keeper Peter Russell.
Peter said that 33 captive birds have been bred this summer.
“It’s also been the best season in the wild that we’ve had.”
The birds had been hardened to fast flowing water at Peacock Spring ready to be introduced to real fast flowing rivers.
A hardening facility is planned at the National Trout Centre (see story page 12) which means less travel for North Island birds.
Each of these new birds has been micro chipped so they could be identified if found again.
The birds were released on the Manganui o te Ao River in an area protected by the Kia Wharite biodiversity project.
Read 887 times
Tweet
Published in Issue 159
Tagged under

More in this category: « Finishing school for whio Trapline volunteers »
back to top
We use cookies to ensure that we give you the best experience on our website.
I accept