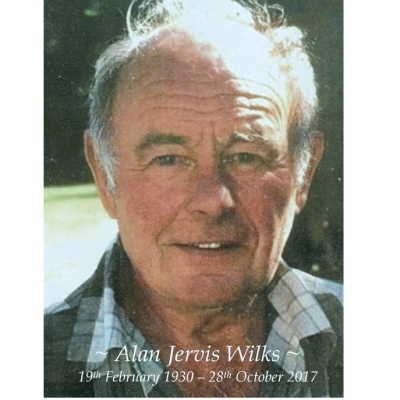 One of our stalwart members, willing to help, and always cheerful and pleased to have a chat. In recent years Alan had made it his special occupation to organise and distribute Flight magazine to DU members and some institutions.

Alan was a resolute bloke and will be sadly missed

A variety of impressive performances in ground breaking roles spanning over three decades is how most people will remember Greytown actor Alan Jervis Wilks, who died last November 2017.

Alan will be remembered by most Ducks Unlimited members. He was a long time stalwart of DUNZ and right until a few months before his death he continued to be the person who ensured that the Flight magazine was delivered to DU members.

In earlier years, working under the screen name Alan Jervis, ‘Hang on a Minute mate!” and the 1970’s film ‘Skin Deep’ are just two of the well-known performances he acted in.
His son David Wilks said the most memorable performance for him was his father’s role as Charles Kane in “The Killing of Kane”, where he won an award for best performance.

David Wilks said his father was a bit reluctant to attend the awards ceremony as he always believed all his peers were equal. “He though all actors were the same, there aren’t any better or worse actors”.

Mr Wilks said his father’s career was successful because of his versatility as an actor. His refusal to be typecast meant he always had constant work even in difficult times.
Despite his on-screen success, one of the things his family will remember him for is always having a Labrador dog by his side and his passion for vegetable gardening, of which there were many grateful recipients of his produce in the Greytown area.

He also had a great love of the outdoors and conservation, which was reflected in a request for donations to Wetland conservation, Ducks Unlimited, in lieu of flowers at his funeral last year.

View the embedded image gallery online at:
https://ducks.org.nz/flight-magazine/item/169-alan-jervis-wilks#sigProId43f5cd2a5c
More in this category: « From The President Takahe – a very special bird »
back to top
We use cookies to ensure that we give you the best experience on our website.
I accept