A break from winter in BC 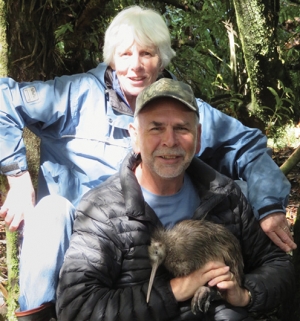 Ducks Unlimited Canada members Len and Pat Everett spent several months in New Zealand this year, partly to avoid winter at home in British Columbia. They visited the Whakamanu Wildlife Trust sanctuary at Manunui near Ruapehu and enjoyed helping out with a North Island brown kiwi’s health check-up. The Canadian couple visited several of our members and wetlands, and spent time fishing and playing golf, and helping their son and partner move into a home they had just bought in Wellington.

On their return home to Canada, Len was honoured with a special award at a DUC 80-50 Anniversary Celebration (80 years in Canada and 50 years in BC) for 30 years of service to DUC  and the wetlands of BC.

Graham Gurr goes in search of a golden dorado.

Return they (the doves) did, thousands of them, an almost continuous stream of birds as far as the eye could see coming directly to the roost, which was now behind us. If the morning shoot had been good, this was sensational.

Having got “one’s eye in” in the morning, everyone shot better and more successfully in the afternoon. What a day!
That evening, Ivan one of the lodge owners turned up; he took charge of the kitchen and cooked paella for dinner, a seafood one, a relief from the meat (steak) we had been eating for almost every meal.
The staff and boys seemed genuinely pleased to see him and there was a noticeable change in the atmosphere. With him there, things went up a notch.
The next morning was again devoted to ducks, everyone shot well and when we all returned to the lodge. Before the bird boys could whisk the ducks away (I suspect they were feeding most of the local population), we asked for some group photographs so we could identify the ducks we had been shooting. We laid out them on the lawn; it was three groups’ morning shoot and all had limited out (as usual).
We had Coscoroba swan (Coscoroba coscoroba), fulvous whistling duck(Dendrocygna bicolor), ringed teal (Callonetta leucophrys, Brazilian teal (Amazonetta brasiliensis), silver teal(Spatula versicolor), yellow-billed pintail (Anas georgica), yellow-billed teal (Anas flavirostris), rosy-billed pochard (Netta peposaca) and one the locals called pato grande, which we never managed to identify properly.
The swan was particularly interesting as it is believed to be the common ancestor of all the swans and geese, as it is really neither one nor the other, but a very interesting one to hunt.
That afternoon we drove (past the dove shoot) out to a new area to hunt perdiz. They are one of my favourite upland game birds, but this time I was to be disappointed.
After a three-hour walk behind a pointer, Di and I, along with Carlos our bird boy for the afternoon, managed to flush seven birds, all but one either out of range or at extreme range.
The Judge and Ross on the other hand had a magnificent hunt, they had a local with them who had an exceptional dog, which found them bird after bird. They almost shot two limits (eight perdiz each) and returned to the meeting point with big grins and tales of a wonderful hunt.
Neil and Alistair fared a little better than Di and I but had been plagued by an out-of-control dog that flushed birds out of range, but they had still managed 11 between them.
That evening Ivan’s girlfriend, Florencia, turned up; it was her birthday. We had a party!!!!
Last morning, we drove about half an hour down the road to a boat launching place where we had hunted from the day before, this time, however, the boys took us to a new spot, out on an island.
On the island, there was a wetland and here, they had erected one of the bamboo blinds they used. Nothing special, just a row of bamboo fronds placed in the ground.
This wetland was mostly mud covered by an inch or so of water, like all the places we hunted, it had been fed for weeks to get the ducks to concentrate in this particular area.
The mud proved to be a problem, as once you stood still; you sank into the mud and were unable to turn to take a shot in any direction except in front.
The boys solved that problem by using the rear of the blind and laid the bamboo down under our feet to give us a more stable platform.
Just as well as the ducks were trying to land in front of us as we sorted ourselves out. Di to the left, the Judge to the right and me in the middle. It proved to be one of those memorable hunts where everyone shot well and the ducks came into the decoys like kamikazes, all too soon the bird boy was saying “only three more” which took three more shots and we were done.
One hour, 75 birds, three happy hunters.
Our final hunt was more restrained, this time we set up in a rice field, the rice had long been harvested, but Ivan paid the farmers to keep some fields flooded with a few inches of water until the end of the duck season.
We had all driven out along the dykes miles from the road and set up almost within sight of each other. Out in the flooded fields, the boys erected the blind and we settled down to wait for the birds, they came on ones and twos, but without the intensity of the morning, it was just nice to be there, we had a magnificent sunset and for me the highlight was shooting one of the Coscorobo swans.
And that was it, a wonderful week with a group of friends, most of them experiencing South America for the first time. We were blessed with some excellent company with our new friends from Texas and at the lodge we were looked after by some of the best, friendliest and most accommodating people I have ever. We were truly sad to leave.
Now I won’t tell you about our delayed flight back to BA and landing at the wrong airport, but I will tell you about the tango show we saw on our last evening.
Tango and Buenos Aires go together like bread and jam. We went to an intimate restaurant and theatre, where we ate an excellent meal, followed by a 90 minute non-stop show of tango dancing and singing – the main female singer was superb and when she sang Buenos Aires from Evita, it just summed up the trip for me. (Go listen to it you’ll see what I mean). Wonderful!
I can’t wait to go back, anyone care to join me?
Published in Issue 175
Tagged under
Read more...
Monday, 04 September 2017 11:56