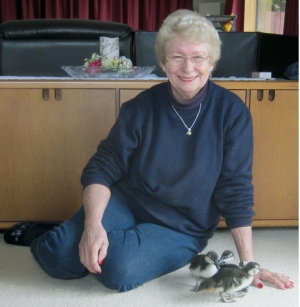 Playing mother duck comes naturally to Judy Fentress, the woman who can’t say no to an egg. Therefore it is not surprising she recently hatched three Whio ducklings – in an incubator. Well what did you think?

Judy has been in the hatching business for some time and in 2012 Flight ran a story about her and her passion for ducklings.

She thought we might be interested to know about the three Whio ducklings. Judy said she used the very same incubator, mentioned in the article in 2012. It was given to her by Hamilton DU members. In August this year she was given the Blue Duck eggs to hatch for the Otorohanga Kiwi House and Native Bird Park (Judy is an honorary life member after 15 years service as treasurer and helping with their wildlife breeding programme).

Some of us may remember the cheeky pukeko that became the star of the Genesis Power TV adds which were to help fund the protection of the Whio. Well Judy was the person who hatched that “cheeky pukeko”.

“Now I have hatched these three little Whio ducklings that will get to benefit from that very project.”

July was given another old incubator in 2013 from a DU member in Rangiwahia. “I cleaned it up, installed a digital thermometer, some egg racks and a few hatching baskets.

This incubator is now working perfectly and has been hatching all sorts of eggs over the past few years.”

During the egg laying season, Judy said she can have 3 to 4 large incubators going and full of various eggs.

“I incubate a lot of rescue eggs, where the nest or mother has been destroyed, or left the nest. If the eggs get into my incubators soon enough, there is a very good chance they will survive. I hatch a lot of rescue mallard eggs (60 so far this year) from Fish & Game as well as individuals finding eggs in need of help.”

Well done Judy, and long may you keep up the good work for some time come.

Published in Issue 169
Tagged under
Read more...
We use cookies to ensure that we give you the best experience on our website.
I accept