What bird bands tells us 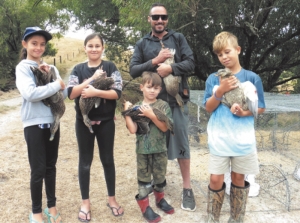 Anyone reporting a duck band is eligible for some great prizes, so leaving bands in the maimai is a sort of lose-lose for everyone.

The first group to use modern bird bands in New Zealand was the Southland Acclimatisation Society in 1911. It ordered 100 aluminium bands from the United States marked “S” and 1 to 100.

These were fitted to mallard ducks reared at its Mataura Hatchery that were then taken 60 kilometres away by rail to be released on Mr Foster’s lagoons at Thornbury.

Though they had never seen the outside of their rearing pens, within a few weeks, a pair had found their way back to the hatchery.

Banding not only reveals the uncanny ability of ducks to find their way around the globe, but also provides vital information to waterfowl managers about the health and survivorship of waterfowl populations.

Southland’s experiment was soon dwarfed by the NZ Wildlife Service and other acclimatisation societies working together from about 1947 onwards to band thousands of mallard and grey ducks.

The early banders used peas as bait and made traps out of willow hoops covered in wire mesh next to lakes like Waihola near Dunedin and also in the Wairarapa.

Back then, bands were made from aluminium, but more recently are made from stainless steel supplied by a Swedish firm. These come pre-numbered with a DOC return address – the department collectively administers all the non-game bird banding scheme records as well.

At present, anyone reporting a duck band is eligible for some great prizes, so leaving bands in the maimai is a sort of lose-lose for everyone involved, not least the ducks themselves. If you find a game bird band, the 24/7 freephone to report it is 0800 BIRD BAND.

Why not do it on your mobile as soon as you get your band before it gets mixed up with other bands or lost. One unique mallard band from Australia, shot in Gordonton, Waikato, was lost for 20 years until it was found under a carpet.

Auckland-Waikato and Eastern Fish & Game are now the main duck banders, with thousands of birds being banded each year. Some individual catches in the Hauraki Plains have well exceeded 1000 in one hit.

Maize is placed where ducks frequent, and they tell all their mates. Slowly, the ducks are accustomed to having cages nearby until they take them for granted. Volunteers play a key role in feeding out and also on the day of the catch, helping process birds and some even help Fish & Game staff to band the ducks under close supervision. It’s a great family affair as kids are a useful height in the low cages.

Birds are recorded as adult or juvenile, male or female and mallard or grey. Grey hybrids are also noted but beware that mallard males undergo what is known as an eclipse plumage in which they lose their distinctive green head and chestnut breast.

They instead assume a temporary summer plumage much more like the female mallard.

As this is a progressive moult, they are found in various stages and I suspect a lot of speculation about hybridisation is simply about eclipse drakes that would look exactly the same even if they were the only species present. The same bird in winter might be a classic greenhead. In the hand, a true grey has just one solid white bar on their lower wing speculum whereas the mallard has two distinct larger bars above and below. Birds that have 1½ tend to be hybrids. However, DNA tests have revealed that almost all greys now have mallard blood in them and vice versa.
It is worth noting, however, that when modern duck banding traps are located next to the few remaining large wetlands – the natural historic habitat of the native grey duck – we still get good numbers of them.

However, the problem is that most of these freshwater wetlands have long since been drained for agricultural production – 99 per cent in Rodney area, for instance.

The grey duck collapse in the Waikato actually preceded the mallard establishing even rudimentary bridgeheads by at least 10-years and was instead closely tied in with huge-scale wetland drainage projects of thousands of acres.

Without the adaptable mallard today, which is far more at home in much-modified environments, it is doubtful we would still have duck seasons as we know them.

Banding has shown some impressive results. Most mallards are sedentary types that rarely venture 20 kilometres from their banding site, but some turn up in all sorts of places around New Zealand.

A few mallards banded in New Zealand have found their way overseas to such places as New Caledonia and French Tahiti.

If you think about how difficult it would be to navigate a plane to find a small island 2000km away, even the smallest error would mean the ducks’ certain demise in the vast Pacific Ocean.

This is an even more incredible accomplishment than the annual migration of mallards in North America and Europe, their natural homes, as there is no historic template for these Pacific travels.

In droughts, it was thought ducks vacate their region for wetter ones, but banding has shown they instead simply move from dry wetlands and ponds to nearby larger rivers and coastal areas, returning when heavy rains again hydrate inland waterways.
The primary purpose of banding is for us to obtain population estimates, survival rates and harvest rates from which to judge the appropriate length of the game season, limit size and so on.
In particular, we notice that juvenile female mallards, which are vulnerable not only in nesting time but also while brood rearing, suffer high hunting mortality rates.

The drakes on the other hand are free to 'swan off' once incubation begins and their increased survivorship reflects this. This is why we recommend 'Go for Green' to hunters, meaning aim to harvest those surplus drakes.

Banding game birds has also been used to study black swans, Canada geese, paradise shelduck, released pheasants and partridge as well as wild quail. Though shoveler ducks are extremely hard to catch, dedicated researchers managed to band enough broods to gain some appreciation for their life history and large-scale movements the length of New Zealand. Likewise, with grey teal, which can be caught in nest boxes.

Because of banding we know that grey teal often come back to nest in the same nest box every year, sometimes rearing two broods in a single year. This makes them very productive.

If any DU members would like to participate in duck banding, Fish & Game is always looking for helpers particularly in the Auckland-Waikato and Eastern regions.

Why not come along and find out where all that duck bling is coming from.

Contact the author and register your interest to be notified closer to banding time.

A long way from home

DU member Diana Chetwin was surprised to spot a rare visitor from the south and now her sighting has been officially confirmed.

On December 2017 I was helping to launch a boat at Sandy Bay, Te Awaiti, South Wairarapa, when I heard the sound of pied stilts; looking down the beach, I saw two birds take flight. One appeared to be darker than the other.

After launching the boat, I walked along to the next bay to see if the birds had landed there. Sure enough, they were fossicking in the rock pools as it was low tide. One was a black and white stilt and the other was clearly a black stilt (kakī).

I had my little camera and was able to get close enough to get a few pictures, but not so close as to disturb them again. The black stilt was banded, but unfortunately it was standing behind a low rock ledge so the feet and coloured leg bands could not be seen properly.

The sighting was reported to the Department of Conservation and the breeding programme at Twizel in Canterbury. Conversations with people there revealed that the black and white stilt was a hybrid from breeding with a black stilt and the other was clearly a black stilt in the North Island.

My photos only showed the bands on one leg, so they were unable to provide any more information on its breeding, but it was definitely from the South Island.

Climate conditions before the sighting were exceptionally dry for the month but there had been rain the week before. No storms though.

Keep a weather eye on the birds

Back in March 2017, near Pokeno on the F&G McKenzie Wetland Block near Pokeno, one hour south of Auckland off SH1 we were banding grey teal there. If DU members could keep an eye out for these I would be pleased to hear about them.

Now for BOW – this is a pond specially reserved for people who pass our course of how to shoot clay targets, dress (pluck) game, tie trout flies, cast a trout rod and there’s a nice salmon meal in a tent to finish with.

The Dean Block is a F&G wetland near Pokeno and BOW pond is part of that. There’s about 50 grey teal nest boxes there and more on the adjoining McKenzie Block.

BOW means Becoming an Outdoor Woman. The lady who did this, Shonagh Lindsay, has since moved on, which means the programme  Grey Teal 1: Good spot – Fish and Game. Dabchicks: Dabchicks at BOW pond. is currently suspended. We took women of all ages and shooting coaches Brian Thompson or Bill McLeod taught them how to shoot a shotgun at clay targets. I taught them how to dress a duck and then cooked it for them, (Schnitzel-style). The Auckland Anglers club taught them how to fly-cast with a trout rod. Sally Spiers and her daughter showed them how to tie a trout fly in the tent, (they fished the one they tied themselves – a Woolly Buggar – that’s actually what it is called, (it was Sally Spiers who chose it). We then gave them a chance to catch a fish near Waikino, (near Waihi).

It was a popular two-day programme, and we did feed them salmon in a F&G tent, Paul Matos was the professional chef who donated his time for many of these. But eventually everyone who wanted to give it a go did so  and bookings in Auckland dried up. Northland Fish & Game also did some for several years with equal success. We were strongly hoping other F&G regions would pick up the proven programme.

I think the main idea is that many woman would like to give these things a go with their men-folk but perhaps lack confidence. We thought if we taught them the basics, they’d join in. After all, if their father, husband, boyfriend or brother already had the gear, the know-how and the places to go. We thought the inspired, initiated and more confident women could now go with them. The feedback was very positive and it seemed everyone, trainers and trainees, had a lot of fun doing it.