Look out for grey teal bands 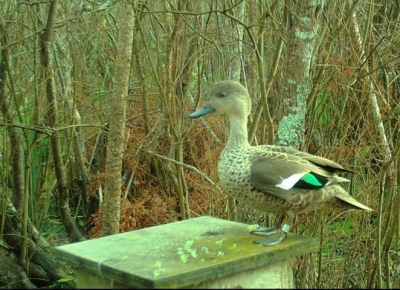 A banded grey teal on a nest box

DU member John Dyer wants to enlist members’  help in tracking grey teal and reporting on any banded birds they come across.

Small numbers of grey teal (tete), which have been known to fly the length of the country, are being banded near Pokeno, Waikato, so you might find a banded grey teal anywhere between Kaitaia and Invercargill.

The band in the photo is the style being used; marked “SEND DOMINION MUSEUM NEW ZEALAND”. At one stage the Dominion Museum in Wellington administered bird banding before the Wildlife Service and later Department of Conservation took on that role.

Some of these older bands are still being used and some longer-lived birds that were around then are probably still alive. Grey teal, however, tend to have a much faster natural turnover and a five-year-old bird is an old one.

It’s suggested any recovered bird band details, (number, species, where, when, how, who found it and your contact details), should be registered by phoning 0800 BIRD BAND, which is a freephone, 24/7 number. You can also go online.

Keep the band somewhere safe and if you don’t get a reply, chase it up. This 0800-number also applies to mallard/ grey duck bands.

If you are cleaning out grey teal nest boxes, be aware that if you find a skeleton, a band may have slipped off its leg into the accumulated straw.

You could prise the straw apart over something solid like a boat bottom rather than over water. If instead you do hear a “plop”, be aware they are not magnetic. How do we know this, you ask? From sifting through mud and water around the nest box with a garden sieve until the lost band was finally recovered.

Grey teal females are somewhat easy to catch on their nest to apply bands to and they are not put off by such research.

The bands show they will often come back to the same nest box or a nearby one for the next few years – sometimes twice in one year.

But you will need a DOC permit to catch and band them. However, Z-series (grey teal and shoveler sized) bands are much easier to apply compared
with #27 mallard/grey duck bands.

If you’d like to help band grey teal and/or mallard and grey ducks in the Auckland/Waikato region; contact This email address is being protected from spambots. You need JavaScript enabled to view it..

Some grey teal bands in the past have been recovered in the hunting season when the protected grey teal have been flying in poor light with similar looking grey ducks, for instance. It was not unusual for the hunter to report that “they found a grey teal band”. The important thing is that the information was passed on.

Ducks Unlimited New Zealand started the grey teal nest box scheme, Operation Gretel, around 1974 when the late Jack Worth of Hamilton thought it might be a great way to increase grey teal numbers.

He imported plans of Carolina wood duck nest boxes from the United States and trialled them. The scheme has worked spectacularly ever since.
There is now detailed how-to information online if you too want to play a part making, installing and/or servicing grey teal nest boxes: visit fishandgame.org.nz.

Using game cameras to catch wildlife on film or video is also a fun way of getting new insights into wildlife activity on your pond such as around grey teal nest boxes. But mind the flood levels.

View the embedded image gallery online at:
https://ducks.org.nz/flight-magazine/item/371-look-out-for-grey-teal-bands#sigProId4babb54901
More in this category: « Another lost duck? AGM 2020 Minutes »
back to top
We use cookies to ensure that we give you the best experience on our website.
I accept