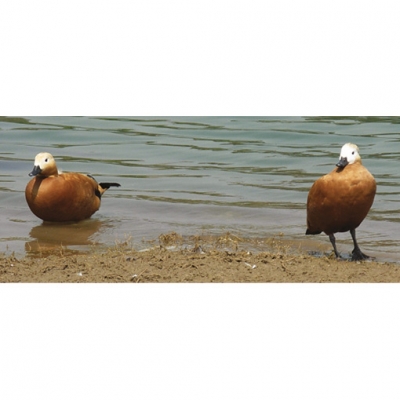 Lots of interesting birds in Myanmar (aka Burma) I was told. I looked forward to seeing a few. A very few was what I got. Domestic ducks were almost everywhere, the variety of colors was amazing. Out on Lake  Inlay I saw an Egret perched high on a pole, and flocks of gulls also on this inland lake.

Finally at the Kandawagyi Gardens at Puin Oo Lwin in the hill country, there were some interesting ducks. Golden ducks I was told. A Google search came up with only Golden Duck restuarants.

Gordon Pilone of Pohangina Wetlands came to the rescue. They are Ruddy shelduck (Tadorna ferruginea). They breed in south-eastern  Europe, east through southern and central Asia to Mongolia and western China, with  separate populations in northwest Africa and Ethiopia. As a migratory species they travel south before the onset of winter, with most  European and Asian birds moving to south and south-eastern Asia, from Afghanistan east to eastern China. North African birds go eastwards along the North African coastline, and Ethiopian birds move into lowland areas.

They are hunted in much of south-eastern  Europe and south Asia, but are relatively well protected in Buddhist countries by its status as a ‘sacred’ bird. Consequently, numbers of ruddy shelducks in central and eastern Asia are thought to be stable, even increasing.

The ruddy shelduck reaches maturity at around two years of age. Courtship is brief, with male and female  engaging in head-bowing and jerking. The nest is a cavity created in a sand or clay bank, usually up to nine eggs. The male defends the nest while the female incubates them up to 29 days, and then both adults tend to the chicks. Liz Brook

View the embedded image gallery online at:
https://ducks.org.nz/flight-magazine/item/338-ruddy-shelduck-in-myanmar#sigProIdb3cebd8888
More in this category: « Letter to the Editor: In Brief »
back to top
We use cookies to ensure that we give you the best experience on our website.
I accept