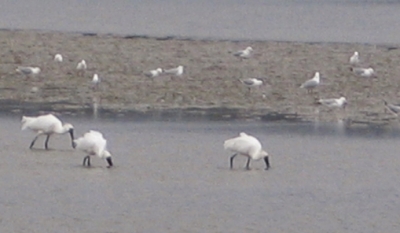 Yet another immigrant from Australia, royal spoonbills were known to Maori as kotuku ngutu papa so must have visited here for many years. Their numbers seem to have  increased in the early 1940s. Some settled in the Waitangiroto River at Okarito. They have extended their range and now breed in a number of places, including Kapiti Island and Parengarenga and Manakau Harbours. There was a report of a colony up the Waiuku River. Royal spoonbills tend to breed near kotuku, shag and gull colonies. Some nests are high in kahikatea trees, others on low shrubs or on the ground. The birds assemble at nesting sites about October and begin their courting behaviour.

Spoonbills feed on insects, shellfish, small fish and frogs. They are readily identified in the distance by the way they feed, walking and sweeping their spoon bill in an arc, often knee deep in water. They feed day or night, whenever the tide is right.

More in this category: « Building and erecting Grey Teal nest boxes First Whio duckling in 15 years »
back to top
We use cookies to ensure that we give you the best experience on our website.
I accept