Big reward for capture of bulbul 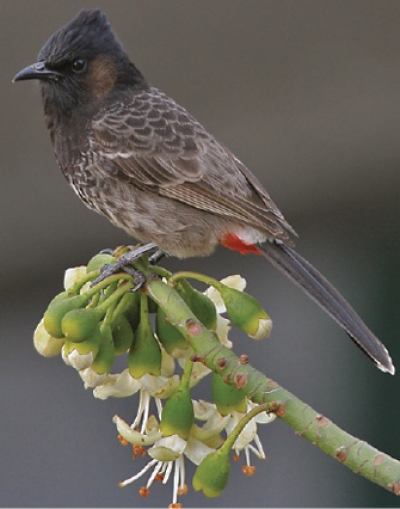 If you live in the Auckland region and see or hear a Red-vented bulbul, ring 0800 08 99 66 and you could receive a $1000 if your information leads to a capture. Reward period runs to the end of February.

Red-vented bulbuls can cause significant  damage to fruit and vegetable crops and they chase and attack other birds. The Ministry for Primary Industries, Department of  Conservation (DOC) and Auckland Council are working together to track and eradicate the red-vented bulbul in Auckland.

The response team working to eradicate this pest bird, which comes from Asia, need  information of sightings.

“We’ve had more than 70 calls about possible sightings since we offered the $300 reward, but are still working to capture one of these birds,” said DOC spokesperson Liz Brooks. “We’re asking the public to keep looking for red-vented bulbuls and to call 0800 80 99 66 if they think they see one. To encourage this we increased the reward to $1000 for a call that leads to a capture,” said Ms Brooks.

“We think there are at least five red-vented bulbuls in Auckland which most likely arrived by ship or yacht. They’ve arrived in Auckland twice before and were successfully eradicated. We want to eliminate them before they make themselves at home,” said Ms Brooks.

The red-vented bulbul is one of the most  invasive bird species in the world and in New Zealand is listed as an unwanted organism  under the Biosecurity Act 1993. The maximum penalty for importing, trading, releasing,  exhibiting or breeding a red-vented bulbul is five years in prison or a fine of $100,000.

There have also been unconfirmed sightings in Orakei, in central Auckland, and at Walton, between Morrinsville and Matamata in Waikato.

Keep an eye and an ear out for red-vented bulbuls. They have a very distinctive call,  unlike other birds. They are easy to spot, a medium-sized bird, around 20 centimetres in length, about the size of a starling. They have a black head, a dark back, grey-white belly, and a distinctive crimson-red patch beneath their tail.  Call 0800 80 99 66.

Their distinctive call can be heard at: http:// www.biosecurity.govt.nz/pests/red-ventedbulbul.

More in this category: « The Bitterns are a Booming Watch out predators – Steve’s on the job »
back to top
We use cookies to ensure that we give you the best experience on our website.
I accept