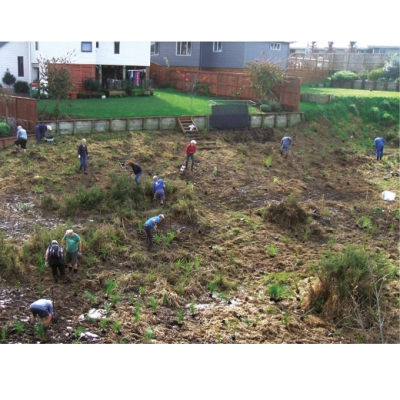 Earlier this year Jim Law took Rex Bushell on a tour of Wairio Wetland. Rex was impressed. He is involved with the Mangaiti Gully Restoration Trust in Hamilton. Mr Bushell was very impressed with the Wairio project.

When he arrived home Mr Bushell took the time to look on Google-earth to help locate the wetland in what he described as a “rather extensive landscape”.

Mr Bushell had spent three weeks touring the country, including the South Island and visited many restoration projects being done by both government institutions (like councils and DOC) and community driven ones.

“The one thing that stood out was that there can be no template to lay over any restoration project. Each one is individual both in people available (and their abilities) to run them and the natural area being restored,” Mr Bushell said.

“I returned to our home project, Mangaiti Gully Restoration Trust, full of inspiration by what I have seen.”

Mr Bushell was so inspired by all he had seen on his travels, he went on to write up a management plan for the whole 30 hectares of Mangaiti Gully.

“Ducks Unlimited are doing such great job,” was his closing comment.

View the embedded image gallery online at:
https://ducks.org.nz/flight-magazine/item/22-transformation-of-mangaiti-gully?tmpl=component&print=1#sigProId260772a44b
We use cookies to ensure that we give you the best experience on our website.
I accept