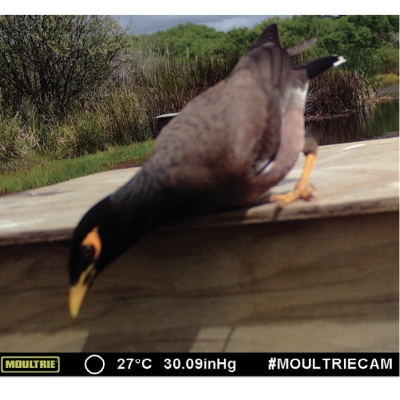 Myna keeps watch John Dyer
Roof Cams
Two “roof cams”, one on a ‘selfie-stick’ beside, and another built inside an extended grey teal nest box lid showed a myna bird carefully checking the coast was clear, then repeatedly over several weeks trying to add paper, plastic and other litter to cover up the resident grey teals eggs as the duck deposited them each day.

The myna also frequently pulled nesting material from below over the teal eggs to try to bury them so it could take over the box for itself. Once the teal began sitting on the eggs full-time to incubate them, the myna gave up and the teal eventually successfully hatched the whole clutch. Game cameras have invisible infra-red capability and this can tell us what is happening at any hour of the day or night at times and places we could previously only speculate about.

This same problem also exists in the US where wood duck nest box complexes can get taken over by introduced starlings. Researchers have tried all manner of deterrents including mirrors inside the nest boxes and even flashing lights. Neither seems to dissuade the starlings from displacing the wood ducks. Starlings cover up duck eggs with fine grass and similar material. However starlings like to nest in a dark corner of the box. Cutting a 100x100mm hole in the lid and adding a diffuser skylight that transmits 80-89% of light thwarted this desire by lighting up the nest box corners too. The wood ducks however don’t seem to mind this new accessory. This is now being trialled in NZ to see if myna birds are similarly deterred and grey teal not.

This has also been trialled in NZ with native grey teal and our own introduced starlings. Lacking a proper study it might be premature to call it a success, but starlings have certainly used the smaller starling boxes and when they do they have not been found inside the larger teal box. However on one occasion the two species shared the same plain nest box and, a bit like cats trying to avoid fight perhaps, they each looked and faced the other way as they incubated side by side, the starling in the corner, the teal in the middle.

Roof cam
The “roof cam” inside the afore mentioned teal box took no less than 7,587 photos of a wriggly restless grey teal which suggests that the myna bird may have left more than just rubbish. Both mynas and starlings are host to bird mites. As many as 5000 of these can infest a nest box and come out at night to suck the birds blood. Pulling back the nesting material will reveal a grey mass of eggs in corners and the mites themselves will live in creaks in the structure.

The latter can be avoided at box building time by putting PVA glue in all the joints. About $30 worth of quaternary ammonia will make up 32-litres and this actually dissolves the mites if any are present. So this might be a useful thing to do when servicing nest boxes, (they need old nesting material removed and new added each year. (This also, incidentally, stops parasite build up in the nest).
However the extent to which mites are a problem to box nesting ducks remains to be seen. One simple technique used for establishing if mites were present in a NZ study of starling nest box use was to leave a hand on the nest for 5 seconds and then inspect - and then brush them off smartly if there were! Starling nest boxes with entry holes 42mm in diameter will let in starlings but not mynas. Myna birds need a 70mm diameter entrance hole. So it would be easy enough to study the effects of added nest boxes for either species, comparing the adjoining grey teal nest box use with and without. Likewise testing skylights.

Sounds like a great MSc study to me as grey teal do not readily desert nests so obtaining data should be straight forward. When grey teal nest boxes are serviced each year in March/April, the sheer amount of rubbish left in them by mynas and to a lessor extent starlings is hard to credit and often more than one clutch of grey teal eggs lies buried somewhere in the middle.

So sorting out starling and myna problems can potentially make grey teal nest box complexes even more productive than currently.

A new article on best practice for grey teal nest box construction and maintenance has recently been added to the NZ Fish & Game website.

View the embedded image gallery online at:
https://ducks.org.nz/flight-magazine/item/173-starling-and-myna-birds-caught-interfering-with-duck-nesting#sigProIdc66df6b5d9
More in this category: « Birds of a different feather Kahutara School’s Ambitious Wetlands project »
back to top
We use cookies to ensure that we give you the best experience on our website.
I accept