Joining the dots on Watermouse 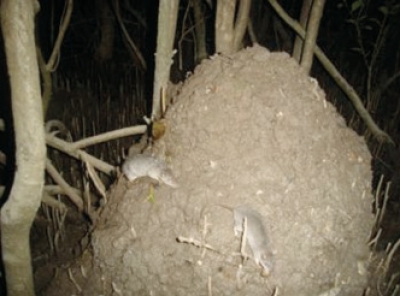 With support of several organisations, Janina Kaluza has been surveying, monitoring and researching the water mouse in a number of locations throughout the Wide Bay and South East Queensland region since February 2012. This work has expanded and built on previous research in the past 15 to 20 years by scientists within State Government and the broader community. However, gaps remain on information that Janina aims to fill.

The water mouse inhabits coastal areas of central and south east Queensland, Northern Territory and New Guinea, and is typically found in coastal saltmarsh and mangrove areas. A key sign of their presence is their nesting mounds that range from free-standing mounds in saltwater couch grasslands to sheltered mounds in sites such as the base of old grey mangrove trees (Avicennia marina) located within the intertidal zone. The water mouse forages in the mangroves at night, feasting on invertebrates such as crabs, shellfish and snails. Loss, fragmentation and degradation of their habitats are key threats to their survival.

Working with local councils, WetlandCare Australia has been awarded funding to undertake a number of small local projects to survey potential water mice habitat areas. The combined information from these projects will contribute towards completing the jigsaw puzzle on water mice in south east Queensland.
Not much is known about this Australian native rodent, with the data collected being an important step in assisting the implementation of the ‘National Recovery Plan for the water mouse (false water rat) Xeromys myoides’ and the delivery of a coordinated approach to its conservation.

Another project focuses on surveying key habitat areas on Russell Island, one of the Southern Moreton Bay Islands, with funding support from a Redland City Council’s Conservation Grant. The water mouse was recorded on the island in the 1990s. The project aims to determine if the water mouse is still present and identify current threats to its habitat and survival. Surveys undertaken over three days in May this year and the data and survey results are currently being collated.

Funding through the City of Gold Coast’s Community Grants Program, WetlandCare Australia will be focussing water mouse survey effort in the Jacobs Well area in early 2016. Survey work will build on knowledge obtained in the 1990s that recorded the presence of the water mouse in this area. Logan City Council, through their Enviro Grants allows for surveying potential habitat areas on the Logan River in search of the water mouse. Approximately 40ha of mangrove areas will be surveyed in early 2016 to record the presence or absence of nests.

Water mice surveys will also be undertaken in early 2016 over 80ha of mangrove vegetation near the mouth of the Caboolture River with funding through the Moreton Bay Regional Council’s Community Grants Program. This project aims to identify the presence or absence of the water mouse in this area. The water mouse has been recorded previously at nearby Donnybrook.
Read 1378 times
Tweet
Published in Issue 165
Tagged under

More in this category: « Pateke flourish, Cape Sanctuary Wild animal releases are illegal »
back to top
We use cookies to ensure that we give you the best experience on our website.
I accept