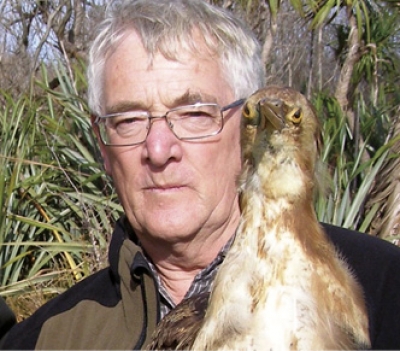 Looking back: John Cheyne and bittern, 2013.

It gives me great pleasure in presenting my annual report for 2015-16.

While a relatively small organisation we certainly punch above our weight in terms of achieving positive outcomes with wetlands and the biodiversity they support.

DU and our wetland conservation arm, Wetland Care NZ, has supported the construction of a number of wetlands in the Wairarapa and Hawke’s Bay and are in discussions with a wetland care group near Warkworth to assist them with their project.

Wairio wetland alongside Wairarapa Moana continues to be a major focus for DU because of its large size and the broad community support for this project. With DU’s Wairarapa Chapter’s excellent stewardship of the project a number of other agencies continue to provide financial support. Without this additional support we would have been unable to achieve what has occurred. Jim Law will provide a more detailed report on this project. A big thank you to our supporters  and sponsors Clean Up Wairarapa Moana  Fund ( Greater Wellington Regional Council), NZ Game Bird Habitat Trust, Department of Conservation, South Wairarapa Rotary Club, Nikau Trust Pharazyn Trust and DU Chapters.

DU’s support of Emma William’s bittern research project on developing monitoring techniques has resulted in Emma recently been award her Doctorate. This is an excellent outcome which will make a major  contribution to bittern conservation nationally. A significant part of her research was based on Lake Whatuma in Central Hawke’s Bay where a Wetland Care Group has been formed. The Group includes landowners, waterfowl hunters, conservationists and Iwi who are now involved in a comprehensive predator control and willow control programme, bird and fish surveys supported financially by the Hawke’s Bay Regional Council, Department of Conservation, Forest & Bird, and Birds NZ. The bittern project supported by DU was an important catalyst for other groups to become involved.

New Zealand clean green image is still under threat and there is a need for both urban and rural communities to work together to achieve improvements in the water quality in our streams and lakes. Central Government is reviewing how we can best achieve this and a number of our members have made submissions on what is being proposed. Protecting the margins of waterways and recreating more wetlands to filter sediment,  nutrients and pathogens is an important option that needs further encouragement and resourcing. Wetlands are the equivalent of the human kidneys. DU’s work with wetlands is not just about creating waterfowl habitat but also assist achieve much broader environmental gains.

I wish to acknowledge the contribution of  the Board of Directors, Secretary, Flight  Editor and Web Site Manager in making our organisation tick along with on-going Chapter and member support. Our sponsor’s important support is also gratefully acknowledged.

We do punch above our weight and we only achieve this by working together. However we need more members and young ones at that, and this is a big challenge for us all.

More in this category: « AGM 2015 - minutes Our wonderful wetlands »
back to top
We use cookies to ensure that we give you the best experience on our website.
I accept