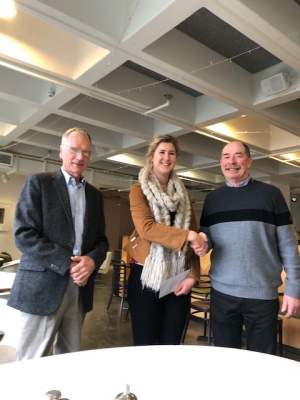 Shannon Bentley, a master’s student at Victoria University and the first recipient of a Wetland Care Scholarship funded by Ducks Unlimited NZ, is studying how wetland restoration on farms changes plant, soil, and microbial characteristics.

For her master’s thesis, she analysed the wetland plant communities, soil physiochemical characteristics, and soil microbial communities to understand how they change with restoration. She found that wetland restoration on private property shifts plant, soil, and microbial characteristics towards desirable remnant wetland conditions. She also showed that the outcomes of wetland restoration varied within and between wetlands. 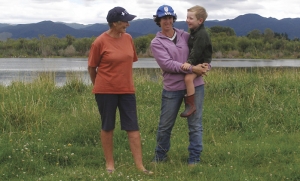 Combining good farming practices with proactive steps to look after the wetlands on their beef and dairy farm, has earned Ducks Unlimited members in the Wairarapa, Jane Donald and her family,  the title of “National Rural Wetland Champion 2014”.
To celebrate World Wetlands Day this year, the National Wetland Trust and the Department of Conservation (DOC) worked with regional councils to find New Zealand’s most wetlandfriendly farming families.
Wetlands are important to maintaining a healthy environment, playing a key role in water purification and flood control. Protecting wetlands and minimising the impact of farming benefits everyone.
Seven regional councils submitted nominations.
The judges - National Wetland Trust founder Gordon Stephenson, National Wetland Trust trustee Keith Thompson and Jan Simmons – were impressed with the wetlands conservation work being done by farmers throughout the
country.
They named the Donald family as the National Rural Wetland Champion for 2014. The family has been farming alongside Lake Wairarapa, at
Big Haywards Lagoon, for more than 150 years.
The judges said: “This farm ticked just about all the boxes for environmental best practice.”
For several generations, since 1856, the Donald family has been working to protect and restore more than 300 hectares of nationally significant
wetlands, on the eastern side of Lake Wairarapa.
In their nomination the Greater Wellington Regional Council (GWRC) described Jane Donald, daughter Paula Gillett and their family - present and past - as role models for wetland restoration.
The GWRC praised the Donalds’ ability to marry their farming and conservation of their wetlands.
“Canny initiative and perseverance describe Jane and Paula’s approach to wetland development and protection. This land has a long association with farmers, hunters, conservationists, and local councils. The majority of the land farmed by the Tairoa partnership is protected by a QEII covenant with actively managed functioning wetlands.
Areas of remnant native forest have been and continue to be fenced off with a programme of weed and animal pest control in and around the wetlands. The farming operation is strategic, with the beef farming associated with the
wetlands and lakeshore and the dairying occurring inland separated from the wetland complexes. The farm and integrated wetlands provide a show case for not just protecting biodiversity and water quality but enhancing it in a most practical and innovative way by clever land managers using agricultural tools.”
The Donald family have had the wetlands permanently protected by a QEII National Trust covenant and as part of their farming operation they also:
• keep stock out of waterways and other
sensitive areas
• plant native wetland plants to restore habitat
• manage pests and weeds to enhance native wildlife
• design their culverts to ensure fish can
move freely
• carefully manage fertiliser and dairy shed effluent to minimise runoff and return nutrients to the land
•  use a feed pad to reduce trampling by stock and erosion.
One example of the  how they incorporate conservation into their farming is the use of cattle as weed control agents. They graze open areas in summer to control weeds such as wild tall fescue and maintain waterfowl habitat. This shows that farming and wetlands can coexist. Wildlife and water quality can be protected while maintaining farm production.
Pioneer Jane Donald has also pioneered aerial application of herbicide to control plant species such as willow and alder which were encroaching on the wetland her father had protected. This is now a commonly used, costeffective method for hard-to-reach wetlands. Done correctly, it controls the spread of introduced plant species enabling native plants to flourish and provide a habitat for native birds and other native wildlife.
The Donald farm is proof that this is a recipe for success. Jane and her family have been rewarded for their conservation work with abundant native wildlife in their wetlands. This includes the rare Australasian bittern (matuku), the first record of royal spoonbills (kōtuku
ngutupapa) nesting in the Wairarapa, and the highest diversity of native fish species among wetlands in the area.
National Wetland Trust founder Gordon Stephenson said: “There’s a heap of initiatives and best practices here, in both farming and conservation. The Donald family are excellent role models for farmers. I’m delighted to see they share what they’ve learnt on their farm with the wider community.”
Highly Commended
The judges awarded a Highly Commended Certificate to the Gilder family of Otago for their work to protect wetlands on several Landcorp dairy farms they manage at Paretai near Balclutha. They have QEII covenants on the wetlands and fenced them as protection from stock. The Gilders are also planning  wetland conservation measures on their own recently purchased block.
The judges were impressed with the Gilder’s best practice farming and involving their community and schools in their conservation work. Helen Gilder said, “It’s important to sow the seed of environmental importance into future generations.”
Jan Simmons of the Department of Conservation was delighted at the high quality of the nominations spanning the country. “These farming families show that profitable farming and environmental stewardship can go hand in hand. They are an inspiration.”
World Wetlands Day is celebrated on February 2, the anniversary of the Ramsar Convention on Wetlands of International Importance held in Iran in 1971. The theme for this year’s National Wetlands Day was ‘Wetlands and Agriculture: Partners for Growth’.
To learn more about wetland restoration visit www.wetlandtrust.org.nz
Published in Issue 159
Tagged under
Read more...
Thursday, 04 April 2019 23:40

The JK Donald Reserve featured in the April issue of Flight, celebrating their becoming the National Rural Wetland Champion 2014.

They are taken in the JK Donald Reserve on the North Eastern side of Lake Wairarapa.

The Lake is a very popular shooting area where Fish & Game allocate Maimai sites on and around the Reserve.

Published in Issue 160
Tagged under
Read more...
We use cookies to ensure that we give you the best experience on our website.
I accept