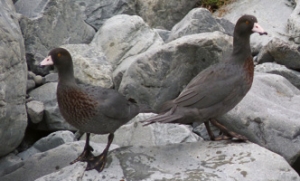 The Whio Forever recovery programme won the Ministry for the Environment Green Ribbon Award this year for protecting our biodiversity.
The Awards recognise outstanding contributions of individuals, organisations,
businesses and communities to protecting and enhancing New Zealand’s environment.
The National Whio Recovery Programme is a partnership between Genesis Energy, the Department of Conservation, Forest and Bird and the Central North Island Blue Duck Charitable Trust. It is focused on the protection and recovery of the whio, a threatened native bird and supports whio security and recovery
sites across the country.
Genesis Energy Environmental Manager, Bonny Lawrence and the Department of Conservation Whio Recovery Group Leader, Andrew Glaser accepted the award from the department’s Director General, Lou Sanson.
Genesis Energy’s Chief Executive, Albert Brantley said the credit for winning the award has to go to the large community of people nationwide who are dedicated to the protection of whio.
“This award recognises the efforts of all of the people who are involved in protecting the whio and raising the profile of this iconic bird. That Genesis Energy is able to fund and support this work is something we are very proud off,” said Albert.
Sponsorship from Genesis Energy will enable the 10-year recovery plan to be delivered ahead of schedule. The target number of whio pairs to be protected at recovery sites has doubled to 200 pairs. Based on results to date it is estimated that by 2016, the target of 400 protected whio pairs will be reached at the
eight security sites Receiving the award DOC’s Whio Recovery Group Leader Andrew Glaser said it was exciting the Whio Forever partnership was
acknowledged, as the Awards recognised a wide range of amazing environmental initiatives around New Zealand.
“It was inspirational to hear about the incredible work happening across the country, and to talk to people who have the same passion and drive to make changes to our natural environment.
“The whio is an icon of our waterways, where there are whio there are healthy, clean waterways so this programme is incredibly important,” he said.
Andy also acknowledged the many whio practitioners and community supporters
who have contributed to the success of the programme.
The whio recovery programme also funds WHIONE projects (Whio Operation Nest Egg) that allows wild whio populations to be boosted with ducklings hatched and raised in safe havens, then released into the wild.
Published in Issue 161
Tagged under
Read more...
Saturday, 23 December 2017 09:23 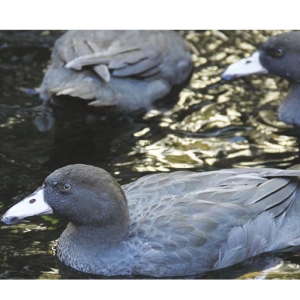