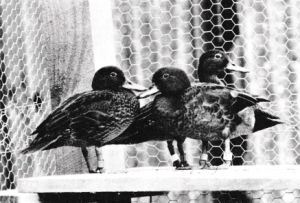 Mr F.N. Hayes outlined the year's highlights - among them the first official recording of captive reared Brown Teal in the wild on the mainland; and the outstanding figure of 101 birds reared to maturity by DU members — expressing thanks to all concerned and particularly the N.Z. Wildlife Service and Messrs J. Gill, 5- Bronger, J. Campbell, J. Glover and W. Clinton—Baker. of the 101 birds reared, 64 were released on Matakana Island, 22 were retained for flock mating and 15 kept fcrrelease in August at Puke Puke Lagoon. Including the 25 birds reared by the N.z. Wildlife Service, Brown Teal reared in New Zealand last breeding season numbered approximately ten per cent of the estimated world population.

In the United Kingdom the Wildfowl Trust has reared 30 birds in the two seasons since Ducks Unlimited sent two females for its collection. It would be some time before the target of 50 breeding pair would be reached but the group was confident this figure would be achieved. The objective for the coming year was 40 pair held by 20 Ducks Unlimited members.

Mr Hayes advised that the Wildlife Service had paid Ducks Unlimited $ 5 for each bird released to the wild - this was passed to breeder members, together with a further $ 5 as a token reimbursement of cost for rearing to maturity. Favourable comments had been received concerning the Brown Teal booklet produced following the Brown Teal seminar in 1980 and thanks expressed to Mrs C.L. Pirani for assistance with production and Dr M. Williams of the Wildlife Service for technical assistance.

Mr Hayes concluded by stating Ducks Unlimited was confident the current season's record would be exceeded in the coming year and that the group was searching for further release sites. He answered questions concerning publicity on television and in scientific journals; population levels; fundraising for the project and stated that the aim was to maintain a stable population level for Brown Teal in the years ahead.

On 9 August 1981 DU released 12 Brown Teal at Puke Puke Lagoon, Foxton — 8 females and 4 males. This is the first time DU has released birds at this time of year and the resident Wildlife Service technician at Puke Puke Lagoon will be keeping a close watch to see how the birds adapt. All 12 birds were those reared towards the end of last breeding season, too late for release during last summer. Thanks to Mr J. Glover for holding most of the birds during the winter. The latest release brings to 76 the number of Brown Teal released during 1981.

Brown Teal at the Wildfowl Trust, Slimbridge: The Wildfowl Trust reports an excellent 1981 breeding season. Slimbridge reared 25 and the two other centres, Martin Mere and Peakirk, have also done well but no figures are available as yet. Overall this indicates that over 50 Brown Teal have been reared in the United Kingdom since DU sent two females in 1979. The Trust now plans to distribute pairs to their other two centres, to leading aviculturists in the United Kingdom, Europe and possibly the United States. The Wildfowl Trust and Ducks Unlimited feel that this is a very important safety aspect should anything unforeseen occur with the species in New Zealand.

1981/82 breeding season: Several breeders have reported eggs being laid during August and hopes are high that DU will break last season's record of 101 Brown Teal reared. This season we will have 40 pair of Brown Teal held by 18, possibly 20, members — well on the way to the 50 breeding pair target. The Wildlife Service will have 10 pairs for the coming season.

Laying of second clutches has now begun. Two older pairs have been released on Rotoroa Island in the Hauraki Gulf, making way for a clutch of orphans coming off Great Barrier Island – providing new genes for the captive breeding programme. The Trust continues to be the major breeder in producing the largest brown teal output for release into the wild.

Published in Issue 166
Tagged under
Read more...
We use cookies to ensure that we give you the best experience on our website.
I accept