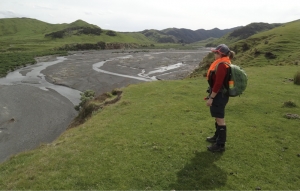 An ambitious predator control programme in and around the Aorangi Forest in the southern Wairarapa is delivering some impressive results.

The Aorangi Restoration Trust is working in partnership with TBfree NZ, which has carried out three aerial applications of 1080 aimed at controlling possums and rats, covering 33,000 hectares. The first 1080 drop was in 2014, with subsequent drops in 2017 and 2020. The trust, which was established in 2011, is encircling the drop zones with predator control measures to help reduce re-infestation and the flow of predators from the forest into surrounding land, including the coastal penguin zone.

Trap lines cover more than 140 kilometres, with traps placed every 100 to 200 metres up most of the major streams in the forest.

"Much of the land is in private ownership and we are very fortunate to have the support of local landowners. They and many other volunteers, both local and regional, help check and service the traps," the trust says.

Recently, trustee Joe Hansen, with Sandra Burles and Nigel Boniface, walked the true left of the Opouawe River from the sea to the Kaiwaka bridge to mark out trap sites at an average of 150 metres between sites.

As well as predator control, the trust and its partners carry out monitoring, penguin recovery and education activities.

Victoria University has been tasked with monitoring the impacts of 1080 in the Aorangi Forest and part of this work is assessing birdsong before and after the 1080 drops. Research so far has shown that 1080 has not reduced the numbers
of native birds.

It involves monitoring six sites in the Aorangi Forest Park and two in the Rimutaka Range ,which are used as reference sites. Chew cards, tracking tunnels and wax tags are used to monitor pest abundance.

Monitoring in 2016 also found an unclassified species of forest gecko.

The main areas of research, including that carried out by summer research students are:
▪ Changes in abundance and recovery of pest species
▪ The impacts of 1080 on native bird species.
▪ Does the forest go silent after a 1080 drop?
▪ The impacts of 1080 on invertebrates, with special emphasis on weta populations.
Bob Burgess, project manager for the trust, is a retired scientist. He trained in plant ecology and recently worked at Victoria University.

He continues to work closely with the university’s scientists.

He says they are already getting some interesting results. A frequent claim of aerial 1080 opponents is that “the forest goes silent after a 1080 drop”.
“The birdsong actually got louder immediately after the first drop – across all native species,” Bob says.

That finding was from 3000 hours of acoustic recordings, made at various times of day and night, by 24 automated sound recording devices which were on location for several months before and after the 1080 drop.

Other Victoria University research projects have looked at the relationships between the forest, seed masting and the effectiveness of 1080 in reducing rat numbers. “Rat numbers went down immediately,” says Bob, “but the rats were back to pre-1080 levels within six months. Possums too recovered, but at
a much slower rate. It took about two years for possum numbers to get back to pre-1080 levels.”

The scientific research has practical implications for pest control in the park.

“Pest control needs to be responsive, triggered by the results of monitoring pest and bird numbers.

And timing of 1080 drops,” says Bob, “needs to be in early spring, so there
will be low rat levels when the birds are breeding.”

Birds will then have a rat-reduced ‘window of opportunity’ in the critical period when eggs, nestlings and incubating adults are vulnerable to predation.
Ducks Unlimited Director Jim Law is one of the trustees of the Aorangi Restoration Trust, along with Clive Paton (chair), Anne Firmin, Chris Lester, John Bissell, Mark St Clair, Tony Didsbury, and Joe Hansen.