The spotless crake or puweto is only half the size of a blackbird and extremely shy but Dr Emma Williams and DOC ranger Rose Graham are experts at getting them to reveal themselves. Emma and Rose teamed up this year on a project to monitor spotless crakes in Waikato’s peat lakes Rotomanuka, Ruatuna and Areare where restoration work is being carried out by DOC and Fonterra’s partnership, Living Water.
DOC’s Arawai kakariki restoration programme has been investigating whether the species is a suitable indicator species for wetland restoration. Spotless crakes are thought to be suitable because they have large clutch sizes of up to five eggs – sometimes producing two clutches per season. They’re also very vulnerable, with nests and chicks being easy prey for a range of wetland predators.
The crakes need specific plants and good water quality for their habitat and food to survive. Theoretically, these specific requirements suggest crake numbers will increase quickly (within a few generations) at any sites that have good predator/weed control and have been restored with the right plantings. As long as wetland restoration efforts cover their home ranges adequately, more crakes should tell you that your restoration efforts have been a success.
Monitoring so far suggests this is true. To date, all three Waikato peat lakes have had three years of management and crake monitoring. During this time, the number of birds detected at listening stations (areas where puweto calls are played) have increased from 11 per cent to 42 per cent of the time. Crakes also rely on habitat that is important for other endangered species, such as the nationally critical Australasian bittern (matuku), suggesting their presence can indicate conditions are good for these species too.
Spotless crakes are a challenge to work with though. Many crake and rail species are difficult to sex as males and females often look similar – puweto are no exception. So little is known about the species, even attempts to sex them using their DNA is a challenge. This is because there is no baseline information to confirm which DNA testing methods are most appropriate to use. Unless you have a known male and female to test your DNA methods on, then you can’t tell whether the results you get are true or not.
To help with this, Arawai kakariki and Massey University are taking DNA samples from dead crakes found in museums or DOC freezers. The sex of these samples is known because internally the reproductive organs of male and female birds are distinct, and this information is recorded during the autopsy. The DNA test results from these samples can then be used to interpret DNA results taken from the live crakes captured in 2017 and 2018.
To monitor crakes, observers sit out and listened for 10 minutes at each station, three times each summer, in the morning or early evening. Each observer plays local puweto calls intermittently and records any sightings or sounds  heard. They are shy so are rarely seen during surveys but are often heard calling back in response to calls.
To radio-track the crakes, Emma and Rose first had to catch them. To do this they trialled cage traps and a hinaki-type net (also known as a fyke net).
The net is usually suspended in water to catch fish. It has a series of funnelshaped openings, which makes it hard for fish or birds to escape.
However, to catch puweto on land, the net must be properly suspended above the water by using twisty ties, string, and stakes. Placed in naturally occurring tunnels among the raupo, and channelled with weed matting, this style of trap has  proven the most successful to date,  having caught four so far.
Once a bird has been caught, Emma  bands it and attaches a transmitter to the bird’s back. They are so small that only tiny transmitters (the size of a jelly-bean) can be used – each lasting been four to seven weeks, and weighing less than a gram. Once the transmitter is attached, the bird can be released.
After that, Rose and Mark Lammas use the signal from the transmitter to refind birds. They follow each bird carefully for three hours a day in all weather conditions every day until the battery life on the transmitter has expired. To refind birds, Rose and Mark listen to the signal produced by the transmitter  using a hand-held radio antenna.
Often the tracker gets  within 10 to 15 metres of the bird, which usually stays out of sight in the dense lakeside vegetation. “It would appear one of the survival techniques of crake is that you can be right next to them and never know they are there. They can sneak across  small open spaces without you seeing them at all,” says Rose.
The project was funded by the Living Water partnership (DOCFonterra).
Transmitters were purchased  by DOC’s Arawai kakariki restoration  fund.
Published in Issue 175
Tagged under
Read more...
Thursday, 12 April 2018 16:10 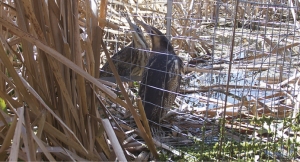 John Summich.
Published in Issue 165
Tagged under
Read more...
We use cookies to ensure that we give you the best experience on our website.
I accept