Restoring the balance for whio 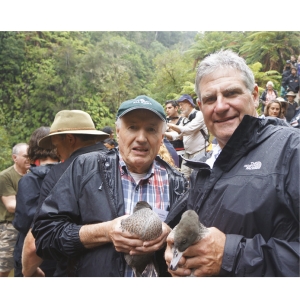 Horizons Regional Councillors joined DOC representatives and iwi at Blue Duck Station in February 2017 for a whio release, during a tour of the northern parts of the ManawatuWhanganui Region. Blue Duck Station set within the Kia Wharite project, has seen Horizons, DOC, Whanganui iwi and
private landowners working in the private lands and remote forests around Whanganui National Park to improve land, water and biodiversity, while enhancing community and economic wellbeing. Kia Wharite is one of the largest projects of its kind in New Zealand in scale and scope.

The whio release was a hands-on opportunity to show how Kia Wharite, a collaborative biodiversity project in the Whanganui/ Ruapehu districts, is directly contributing to the survival of native species.

Since 2008, Horizons, DOC, Whanganui iwi and private landowners have been working in the private lands and remote forests around Whanganui National Park to improve land, water and biodiversity health, while enhancing community and economic wellbeing. Kia Wharite is one of the largest projects of its kind in New Zealand in terms of scale and scope.

The Kia Wharite project spans over 180,000 hectares and includes a mixture of private land and parts of the Whanganui National Park, the second largest lowland forest in the North Island. This remote area is home to the largest population of Western North Island brown kiwi and plays host to many native bird and plant species.

Possums, goats, stoats and other predators  have threatened the health of the forest and put the long-term future of its inhabitants in jeopardy.

Horizons Councillor Bruce Rollinson said as part of the project extensive possum control operations have been undertaken by Horizons and OSPRI on rated land, and DOC on  crown land. OSPRI have signalled a phased withdrawal from areas inside the project sites, as these areas are declared TB free. Currently approximately 150,000 hectares of land has regular possum control undertaken in the project area.

This work, alongside pest and weed control, protecting bush and wetlands and monitoring threatened native species, is also why it was possible to release 14 whio into the Kaiwhakauka Stream. Here, whio are protected on the river through a network of traps managed by Blue Duck Station volunteers to target stoats, said Cr Rollinson.

Predator control is carried out in the wider whio security site by Horizons and DOC; over 85 km of trap lines are in place along the Retaruke and Manganui o te Ao rivers, providing necessary protection for whio.

Department of Conservation deputy director general operations Mike Slater said with a population of fewer than 3000, this national whio security site is one of eight locations identified across the country as being essential for whio recovery.

With the support of Genesis Energy, DOC has been able to double the number of fully secure whio breeding sites, boost pest control efforts and enhance productivity and survival of  these rare native ducks. The ultimate goal of  this security site is to achieve protection to 50 breeding pairs, said Mr Slater.

Whio are adapted to live on fast-flowing rivers so finding them means you have also found clean, fast-flowing water with a good supply of insects. This makes whio important indicators of ecosystem health, they only exist  where there is high quality, clean and healthy waterways.

The sheep and beef cattle farm, located 55km south-west of Taumarunui, is set on 2915 hectares of medium to steep hill countryDuck Station owner and manager Dan Steele said grazing areas have been deliberately offset by native bush and manuka.  “Through the Kia Wharite project, we have
worked closely with Horizons and DOC to develop a sustainable land plan, and fence ofselected farm areas to protect native fauna and flora,” said Dan Steele.

“The Station has approximately 450 traps for stoats, mustelids, feral cats, rats, mice and hedgehogs; all enemies of the blue duck as well as other native species. In partnership with Kia Wharite, we maintain and reset the traps approximately every two weeks; this is undertaken mainly by our  olunteers or ecowarriors as we call them.

“Embracing the environment in this way provided the perfect place to set up a lodge and tourism operation. In a relatively short  time we have grown to approximately 8000  visitors a year, many of whom become ecowarriors during their stay,” said Dan Steele.

Cr Rollinson said Kia Wharite is proving to be a successful approach, with the project already  exceeding some of its goals. “It shows what  can be accomplished when organisations join forces and work collaboratively.”