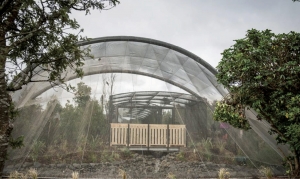 At Pukaha Mt Bruce staff have been delighted with the way the birds have settled into their new home in the free flight aviary. The whio and pateke are loving their new areas and are not difficult to spot. The whio are in an ‘internal aviary’ with a new river run while the other birds are all together in the bigger aviary space.  Both the pateke and whio are breeding pairs.

The korimako seem to spend all day singing  and while the kaka and kereru took a little while to settle in, they have been busy exploring their new space and are almost oblivious to the visitors who walk through the aviary.

If you are lucky enough to be at Pukaha at the free flight aviary at around 4pm there could be a ranger talk at the “Final Flight” area. It tells the story of the restoration project for the Pukaha forest and how captive breeding can help to protect and grow our endangered species 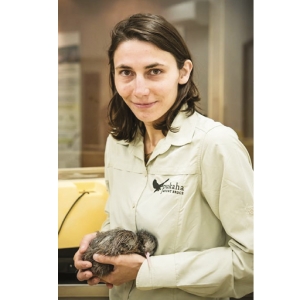 Pukaha was delighted to announce the 100th kiwi chick to be hatched in the nursery since it started hatching kiwi chicks under human care in September 2005 MB100 made its way into the world on March 18, 2017. Lead kiwi ranger, Jess Flamy, was on hand to assist. Jess  has supervised the hatch of nine kiwi at Pukaha  this year so MB100 was in very safe hands!

To celebrate the 100 milestone hatch, Pukaha  held a Kids Go Free day in March when MB100 was having one of its first feeds at 12 noon.

More conservation breeding success with the hatch of five more pateke ducklings in the Free Flight Aviary. This is the third clutch for the same pateke pair this year so they must be pretty happy in their new home. Mum is fairly happy showing off her new brood and at 4pm daily there is a ranger talk in the Free Flight Aviary and the pateke are usually happy to eat the mealworm treats they get at that time on  their pond.

DOC does its bit

A young kea has been released back into the  wild in Fiordland after his severely injured leg was successfully remodelled by vets. Thanks to Real Journeys, Air New Zealand and Meridian Energy for being involved in this happy ending.

The mount Allen buttercup was found by DOC botanists on a remote mountain range on Stewart Island/Rakiura. The island is a hotspot for endemic plants with at least 28 native plants, many of them alpine species, found there.

Kōrure (mottled petrels) have been  translocated from Whenua Hou (Codfish Island) to their new home at Maungaharuru. These translocations gave 67 birds a new home and are part of an effort to restore seabird populations.

Pukaha has a new general manager, Emily Court. She started in her role immediately after Labour weekend.

Ms Court moved to the Wairarapa from Christchurch two years ago after spending the previous five years working in a business recovery role after the 2010 and 2011 Christchurch earthquakes. She led a recovery programme for the international education sector which included securing a $5million funding package during her tenure.

Emily has also had previous roles in banking, retail, economic development and international education. Her most recent role has been with the Wairarapa branch of Public Trust as a Professional Trustee and manager.

Ms Court has a business degree from Victoria University, an MBA and also holds a formal project management qualification.

This extensive business background will be a real asset to Pukaha, as they are in the process of planning several new and interesting developments.

Emily is excited about the new role and outside of it, will continue to spend time with her two children in their new Wairarapa home. In their spare time the family enjoys renovating their old bungalow in Carterton, riding their horses and exploring the North Island.

Welcome to the Pukaha team Emily