Whistling as he works 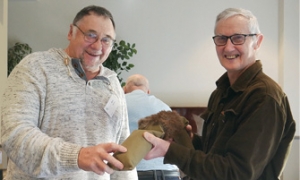 The guest speaker at this year’s conference, Murray Stevenson, spoke about gun dogs and the importance of training them to suit the terrain. The three main groups of gun dogs – retrievers, spaniels and pointers/setters – all have very different temperaments and purposes.

He stressed the importance of letting puppies play and not putting too much pressure on them too early, saying to fully train a gun dog takes two years or more.

Experience has taught him that eight dogs equals eight times more work. It was important for owners of multiple dogs to give each dog one-on-one time and make sure none were left out.

He brought along some of his $3000 worth of dog training equipment with him and explained some basic techniques such as teaching pups to respond to a whistle rather than a human voice, and as a first step for them to learn “yes” and “no”.

Through a series of anecdotes, Murray described his experiences with different breeds. Labradors, he said, were easy to train as they were one-dimensional: they liked peanut butter sandwiches and retrieving ducks.

His advice for teaching a dog to run in a straight line is to train it along a fenceline, using incremental steps, so the dog can only deviate left or right, not both ways, making it easier to control.

He concluded by saying, “We hurry our training too much. Make sure your dog is 100 per cent right before you move on.”