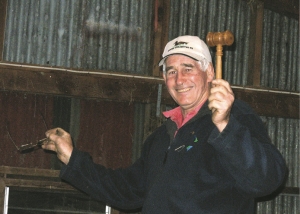 John and Diny Dermer were this year named as the North Island’s top farm foresters. They both love trees, and their farm at Cheltenham near Feilding reflects the attention that has been put into enhancing the landscape with a wide variety of native and exotic trees.
Selected as top forester in the North Island, John received a Husqvarna chainsaw. The foresters are tested on their tree knowledge, along with how well their trees are planted and managed.
John, a long time director of DUNZ, is obviously also keen on the birds. Ponds and nesting places are available around the farm. He is always on the lookout for yet another spot to be turned into a haven for water fowl.
The trees, radiata pine, cypress, redwood and eucalyptus are mostly planted on land that would be difficult to farm effectively. Many older trees including large oaks and several large fruit trees in the original old orchard show the love of trees was encouraged long ago.
The Dermers also grow cereal cash crops, do bull finishing, lamb finishing and run a small ewe breeding flock. Oh – and there are turkey’s that have the freedom of the farm. Diny also maintains a large number of hens, and several Peking ducks. Diny keeps the garden in order and has several citrus trees including an orange, grapefruit and several lemon trees always covered in fruit. They do well around the house. There are also several camellias. But Diny is also the extra farm hand, and is often to be found out on the tractor or helping in the wool shed.
Published in Issue 161
Tagged under
Read more...
Wednesday, 07 February 2018 02:14

Makutu Link is taking off

Long seen as a logical extension of Forest & Bird’s Matuku Reserve, the property adjacent to Habitat Te Henga became available after many years.

Although a large donation was received nine years ago, from a generous benefactor, with the rising cost of Auckland property more fundraising was needed, and three of us from the Native Restoration Trust and the Waitakere branch of Forest & Bird started on a roller coaster ride to reach the $2 million target.

The 37ha property has a maturing mixed podocarp Kauri forest and a wetland edge on the Waitakere River. This wetland aspect has even more importance, with the development of the Habitat Te Henga project and its effective predator control, leading to pateke releases over the last two years.

The forested portion was seen as the last link in the ecological chain of the corridor from the predator controlled Ark in the Park and its buffer zone to Makutu Reserve.

Tomtit, not seen for over 30 years since the purchase of the reserve, have become  established. Robins, whiteheads, and even a kokako, from those translocated to the Arc have made their way through. But it isn’t just one way traffic – pateke have dispersed upriver and when the importance of the river’s edge as a foraging and commuting corridor for long-tailed bats is added, the value of the property to conservation is irrefutable.

With the wetland, the biggest in the Auckland region with no public access, creating easy access to a river edge and wetland could give further value, and a house has scope to accommodate the many overseas and local students studying at Makutu or Arc in the Park. A small barn has potential as a wetland education and display centre.

We obviously just had to succeed!

Many trials and tribulations later, and many disappointments, when organisations we felt would be supportive were not, we came to the stage where we had sufficient support to make an offer that has been conditionally accepted. That support included some loans, which we are confident of  repaying over several months. Purchasing the property is just the first step  as the house will undoubtedly need some changes to make is suitable as a field base and student accommodation. The barn, likewise, will morph more slowly as a wetland display centre, and the 2 – 3 ha of buttercup filled
paddocks will require planning and plating to return them to alluvial sedge land and forest.

Fundraising will be ongoing and our Givealittle Appeal ran to October 27, but more support will be welcomed at any time. (See www.Givealittle.co.nz/project/makutulink)

An important part of our presentation to raise funds has been an excellent video shot from a drone operated by local drone company, X-craft. Experimenting with drones to receive the multiple signals from our transmittercarrying pateke has been one part of X-craft’s assistance,
but this easier task of videoing shows aspects of our wetland and forest that make this area a special one for conservation and education. The video can be seen on www.matukulink.kiwi.