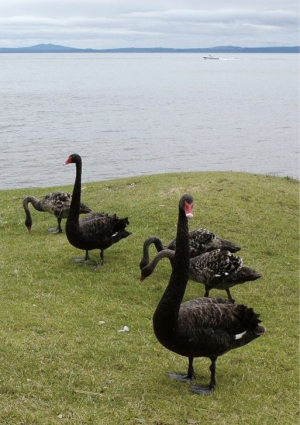 Before the arrival of the Māori in New Zealand, a subspecies of the Black Swan known as the New Zealand Swan had developed in the islands, but was apparently hunted to extinction. In 1864, the Australian Black Swan was introduced to New Zealand as an ornamental waterfowl, and populations are now common on larger coastal or inland lakes, especially Rotorua Lakes, Lake Taupo, Lake Wairarapa and Lake Ellesmere, and the Chatham Islands. Black Swans have also naturally flown to New Zealand, leading scientists to consider them a native rather than exotic species, although the present population appears to be largely descended from deliberate introductions.
With its elegant long neck, the black swan (Cygnus atratus) is our largest wetland bird, around 1.2 metres long and weighing 5–6 kilograms. On the water, it appears all black with a bright red bill;
however, in flight the bird shows wide white wing margins. It has a bugle-like call, and hisses to defend its nest.
About 100 black swans were brought to the South Island from Australia in the 1860s, and the species has traditionally been regarded as introduced. However, numbers have increased faster than expected, suggesting more birds arrived independently – in which case it should be considered a self-introduced native.
To add to the intrigue, the extinct native swan, mentioned in paragraph one, previously named Cygnus sumnerensis, is now thought to have been the same species as the black swan.
Black swans breed either in pairs or in colonies. Their nests are huge mounds of long foliage, built near lake edges. Females may lay up to 14 green eggs, but six is the average. In colonies, up to 40 cygnets gather in large crèches guarded by a few adults.
Juveniles leave their natal lake and spend several years in estuarine or coastal sites, returning to take up permanent residence once they reach breeding age at between two and four years old. Not all birds breed every year. The oldest known swan in New Zealand was at least 29. Black swans are partially protected, and are hunted in season according to regional limits. About 5000 are shot each year.
Thanks to Te Ara Encyclopedia and Wikipedia.
Published in Issue 159
Tagged under
Read more...
AGM AGM 2013 AGM 2015 Bittern Blue Duck Blue Duck Station Breeding Conference Conservation Endangered Species Habitat Hunting Migration Obituary Pateke Planting Predator control Predators President report Pukaha Mount Bruce Release Restoration Shooting Trapping Wairio WetlandCare Wetland Development Wetland Restoration Wetlands Whio
We use cookies to ensure that we give you the best experience on our website.
I accept