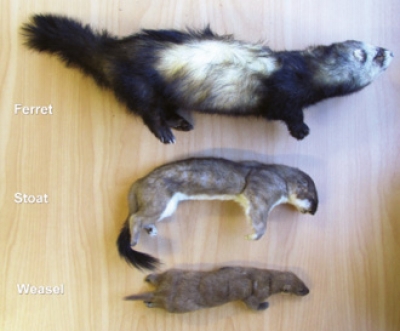 Mustelids: From the top, Ferret, Stoat, Weasel. GWRC
In early August Steve Playle completed the trapping maintenance down at the wetlands for the month. It was the first servicing of equipment for the new financial year.
Result were 7 ferrets, 2 weasels, 6 rats, 3 hedgehogs, 3 harrier hawks and 2 magpies.
“We have cracked 50 ferrets since trapping commenced last July. A big tabby cat was swimming from the new Wairio bund out to the sprayed willows when I approached it on the quad. Pity I wasn’t carrying a firearm as it would have been easy to dispatch. Water levels were very high in places so some traps were
not able to be serviced.
“I saw a slate grey Bittern in the Mathews drain almost opposite where DoC launch their boats in Boggy Pond. I saw a second darker coloured Bittern at the southern end of the Stage one area of the Ducks Unlimited Restoration block. Great to see!”
Heavy rain prevented Steve from getting traps out at that time but he was out again the next week. Lake Rototawai was serviced also. He also took a cat, 1 rat, 1 hedgehog and a mouse from traps at Te Hopai Lagoon.
Steve regularly services traps in the areas we monitor. In July, almost 12 months since the first Timms traps went on the ground at Boggy Pond/Wairio Wetlands he caught 3 cats, 4 ferrets, 2 weasels, 4 rats, 12 hedgehogs, 4 mice, 6 magpies and 1 harrier hawk.
For the year total predators removed from this job are; 20 cats, 43 ferrets, 1 stoat, 13 weasels, 159 hedgehogs, 52 rats, 29 mice, 10 magpies, 2 harrier hawks and 1 rabbit.
During duck shooting season Steve reported we lost a total of 3 DOC 250 traps and 2 Timms traps to light fingered people.
Steve also did the first service of the Lake Rototawai predator control sites on July 4 and cleared 2 cats, 2 hedgehogs and 1 mouse from the traps. All bait stations were empty of bait too. The Te Hopai Lagoon traps were serviced and he took 2 very large cats, 3 hedgehogs and 1 mouse from those traps.
Wario September 5  - Steve completed trap servicing down at the wetlands for the month. Predators caught were 2 cats, 6 ferrets (plus one that Jim Law took from a trap making a total of 7), 1 weasel, 3 rats, 8 hedgehogs, 8 mice and 2 magpies.
Steve reports he saw a Bittern about 60 meters south of the viewing hide on the Boggy side of the stop bank and he saw another at Pounui Lagoon.
Steve will have commence fortnightly servicing of the traps at both of these
operations until breeding season is finished around the end of February.
“As a matter of interest we have already caught 14 ferrets at the Boggy/Wairio wetlands for August and September so it just shows we cannot take the handbrake off regular predator control any time soon,” said Steve.
Read 1277 times Last modified on Monday, 22 July 2019 11:38
Tweet
Published in Issue 161
Tagged under