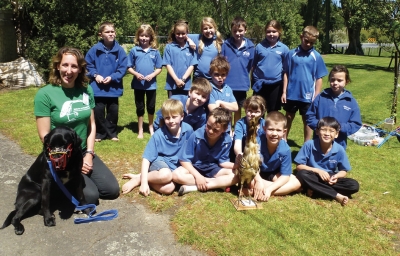 Bittern lesson: Emma Williams and Gill Lundie visited Kahutara School in the Wairarapa where Emma talked with the children who were keen to hear about bitterns, and also to learn more about why there was a dog involved. Gill Lundie

Urban bittern chicks get into strife

Now, if I was to ask how many of you have seen a juvenile bittern or a bittern nest, I think it’d be safe to assume that most of you haven’t. And that’s saying a lot given that you are all wetland enthusiasts who regularly work and play in these kind of habitats.

So when we got a report that a female bittern chick had been found wandering along a road in Christchurch you can imagine our surprise. What was one of the most cryptic and secretive  wetland birds doing on a road in the city? And the surprises didn’t end there – a few weeks later a second female bittern chick walked into a residential garage, only 500m from the location where the first bittern was found.

There had to be a nest nearby – but where?

Both bitterns were very skinny and clearly  dehydrated. They were taken to bird rehabilitator Jackie Stevenson, who set about trying to fatten them up and get them feeding for themselves. In the meantime, local  ornithologist Peter Langlands set about trying  to find their nest.

Now this is no easy task. Bittern nests are  tricky to find. A broody female bittern will build her nest by bending blades of raupo to form a floating platform that is perfectly  hidden in the thick vegetation. And she’s not necessarily alone. Male bitterns can have  multiple females, which all appear to nest within close proximity to each other.

Once a mother-to-be is happy with her nest she’ll lay between 3 and 5 eggs before starting to incubate. She hatches the eggs and rears the chicks alone, apparently chasing the male away if he tries to get too close. While incubating, she’s almost impossible to see as her streaked plumage blends perfectly in  with the surrounding vegetation. Occasionally she’ll slip silently off the nest to feed, but only momentarily as this leaves her eggs vulnerable to predators.

After about 25 days, her eggs will hatch to produce little fluffy chicks with Albert Einstein inspired hairdo’s. These fuzz balls, emerge as masters of disguise straight from the eggs, and will adopt a perfect ‘freeze pose’ that looks similar to that of the adults if they are disturbed. Chicks fledge at about seven weeks old. However, there is some suggestion that they may start wandering from the nest as early as two weeks old - which is perhaps how one chick ended up on a city road and the other in a household garage.

Midway between the locations where these two birds were found lies Travis wetland, a 120 hectare swamp complex that has been  restored over the last 15 years by the Travis wetland trust and the Christchurch council.  It is the most likely place where these two birds came from. As it happens Travis is a noteworthy place, with an interesting history. In the 1960’s, this beautiful wetland was under threat from developers, who wanted to convert it to a residential area. Luckily, the locals had other ideas. They realised the importance of the site’s natural biodiversity, and argued long and hard for its protection. After a long battle that involved a petition signed by almost 7000  people, biodiversity won out, and in 1997 the site became a natural heritage park.

And lucky for bitterns that it did!

Since then, these two bitterns have done well in  captivity and we were able to release them over the festive season - one along the Waimakariri river and the other at Harts Creeks. We attached radio transmitters to both bitterns, one of which was kindly funded by Ducks Unlimited. Both of these birds will be tracked regularly by local enthusiasts and, as female  survival and breeding success is the secret to  saving a species in decline, and these birds are the only females to carry transmitters at the moment - the information we gain will be essential for saving the species.

And thanks to Gill Lundie for organising the school visit.