Plovers go to Russia for love 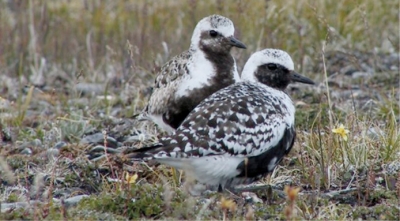 Two small migratory shorebirds - Grey Plovers from the Adelaide International Bird Sanctuary - made it once again all the way to the remote Wrangel Island off the coast of Russia near the Arctic Circle.

On their annual migration to breed the birds fly over 13000kms from Thompson Beach, north of Adelaide, including an incredible 7000km non-stop stretch from Adelaide to China.

“Who would have thought that a bird at Thompson Beach would, just a few months later, be roosting among polar bears and musk ox?” said Natural Resources Adelaide and Mt Lofty Ranges Manager of Coast and Marine, Tony Flaherty.

Mr Flaherty said the plovers were tagged with tiny solar-powered satellite trackers, to discover what parts of the Adelaide International Bird Sanctuary and Gulf St Vincent they use. Researchers also wanted to learn where they go and stop along their epic journey to the Arctic breeding grounds.

“Little was known about the migratory route of the plover, and knowing where these birds go really helps with conservation efforts to protect shorebirds,” Mr Flaherty said.

The tagged plovers left in March to fly along the East Asian-Australasian Flyway, taking distinctive routes to the northern hemisphere.

“Disturbance and impacts to coasts across the  birds’ migratory route all add up. What we do on our local beaches can also help these birds prepare for these incredible journeys.”

Researchers were also surprised at how little the birds moved from Thompson Beach during the Australian Summer. Here they spent their time feeding on the rich tidal flats and roosting on the beaches and nearby salt marsh and lagoons.

During the warmer months, the Adelaide International Bird Sanctuary, located north of  Adelaide, is home to approximately 27000 resident and migratory shorebirds. The area provides a safe haven for the shorebirds and a smorgasbord for feasting.

The research has been carried out by a partnership between Friends of Shorebirds SE, the Victorian Wader Study Group and the South Australian Department of Environment, Water, and Natural Resources, with funding support from the Adelaide and Mt Lofty Ranges Natural Resources Management Board Shorebird Project and the Australian Government-funded Samphire Coast Icon Project.