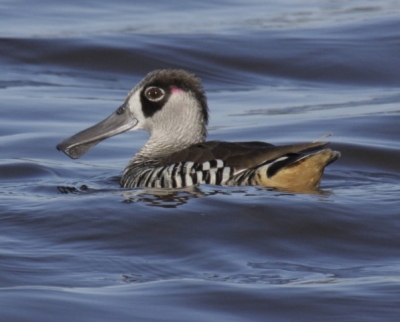 Alan Fielding follows up his story on the white-eye duck with that of another duck disappearance – the pink-eared duck.

The pink-eared duck or zebra duck (Malacorhynchus membranaceus), whose Maori name appears to be lost with it, is one of only two genera of the tribe Malacorhynchini, the other being the Salvadori’s duck from New Guinea.

The pink-ear, known in New Zealand from bone fragments of two individuals found by Dr Robert Falla in 1939-41 at Pyramid Valley, north Canterbury, is of geologically recent origin (about 3,500 years), strongly suggesting they are of the Australian species which is widely distributed in inland south-east and south-west Australian and also to a lesser extent in the north-east.

Taxonomical discussions have suggested that the bone fragments may be of a separate species – the so-called Scarlett’s duck – but there remains the doubt.

Pink-ears are a highly nomadic species and their numbers vary greatly depending on the rainfall. Their outstanding mobility makes it easy to see how after a good westerly storm, this country might have been attractive to them. Although the lack of much evidence suggests these birds were vagrants and did not breed here, a stray pink-ear turned up in Auckland in 1990, proving just how mobile the species is.

One thing remains certain: they were self-introduced and therefore indigenous. Their numbers in New Zealand may have escaped suitable preservative sedimentation and they were perhaps more numerous. If this had been during the pre-Maori period,it could explain the loss or non-existence of a name.

Pink-ears are astonishingly quiet, trusting birds which leads one to wonder whether that led to their downfall in colonising New Zealand. These ducks are unmistakable and quite delightful with their distinct zebra stripes and large bill – a bill that is spatulated to a much greater degree than the shovelers and gives them a distinct square-tipped appearance.

Unlike shovelers, the young pink-ears are hatched with the spatulate bill already present along with the distinct “pink ear”, a small pinkish patch slightly behind the eye and difficult to see at a distance. This, as with the zebra stripes, is pale in the juveniles.

The strangely large bill, with its nostrils higher up than usual, is an efficient strainer of tiny organisms such as algae, plankton, insects, crustaceans, and molluscs from the water and mud. This foraging takes place usually without up-ending and never by diving.

Breeding is usually heralded by the sudden invasion of typically shallow, seasonal wetlands (rainfall not exceeding 40mm a year), preferably of long-established origin so that food species populations are high.

The water levels may recede quite rapidly so reproduction needs to be speedy and opportunistic so the nests, typically drowned in down, may be built almost anywhere, often in great density – and might be dispensed with altogether and replaced with “dump laying” even on top of active nests.

If conditions remain suitable, however, they may breed for almost the whole year, with both parents sharing nursery duties. It is thought they may pair for life. Both genders make a chirping, twittering, strange whistling sound, which while soft and deeper in the females and “purring” when communicating with young, can be quite noisy en masse. In flight, these birds utter an unusual trilling sound. Incorrectly believed to be weak fliers, they are quite strong and outstandingly manoeuvrable, extremely gregarious and freely sociable with other waterfowl, notable grey teal.

A highly specialised and successful species, it can inhabit seasonal inland shallow waters, brackish, marine or fresh, through to permanent deeper water and even coastal inlets and mangrove wetlands.

Considering the huge numbers of plant and animal species that have been lost to this country, why not recover what we can, even if it is not endemic?

In an earlier life Alan Fielding founded the Manawatu Estuary Trust and has
established several public and private protected areas. He also instigated and coordinated the first National Mangrove Symposium (in Northland) for the Nature Conservation Council.
Read 58 times Last modified on Friday, 13 March 2020 01:17
Tweet
Published in Issue 178
Tagged under