‘The biggest conservation project on Earth’ 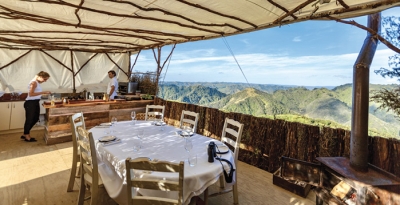 Dan Steele, the man with the gavel at the yearly DU auctions, headed to Wellington the week after the AGM to play to a different kind of crowd – at Homewood, the home of the British high commissioner, as part of Wellington on a Plate, the city’s month-long celebration of good food.

Dan and UK chef Jack Cashmore teamed up to offer guests a 10-course degustation menu, finishing the meal with a discussion by Dan on conservation, sustainability and a better New Zealand.

Dan said in an interview after the event: “New Zealand could be the biggest conservation project on Earth.

“For me, the big picture is that New Zealand could lead the world in producing quality products which world-class chefs, like Jack Cashmore, want to use in the best restaurants in the world. We can also lead in the realm of biodiversity management and conservation.

“It’s a big ask to get the primary industries on board to work closely together, but if we can pull it off and be recognised as the biggest conservation project on Earth at the same time as continuing to farm, then every product in New Zealand will become more valuable,” he said.

Sharing in his philosophy is Jack, who has worked in two Michelin-starred restaurants and was head chef at Anglo in London. Since meeting almost 10 years ago, Jack and Dan have shared a vision for both the farm and New Zealand.

Their goal is for Blue Duck Station and its pop-up restaurant, The Chef’s Table at Blue Duck Station, which was open last summer, to be the best overnight and fine-dining experience in New Zealand – based on the philosophy of nature conservation and sustainability.

Jack said it was New Zealand’s array of biodiversity, open culture, and sense of community that kept him coming back. Now his second home, Blue Duck Station offers him the chance to build a small restaurant from scratch.