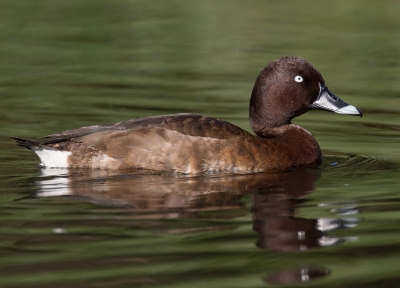 A lost duck? Alan Fielding wonders what became of the white-eye and suggests it has a place among New Zealand wildlife Alan Fielding

The white-eye, hardhead, brownhead, aythya australis australis, or karakahia is a pochard – a diving duck closely related to the scaup. Strangely, its Maori name is also used, as an alternative name for native grey duck or pārera.

It is present in considerable numbers in eastern and south-western Australia.

When it first appeared in New Zealand, is not known for certain, but it was first recorded by Professor FW Hutton on Lake Whangape in the lower Waikato in 1867 and a year later recorded in abundance on lakes Waikare and Rotomahana.

So abundant was it that local gentlemen, after worshipping God and praising His creations, regularly took a leisurely punt and shot them in their hundreds, if not thousands.

Needless to say, game management procedures were not functioning at that time and apparently foresight was not generally prevalent. It was yet again a fine example of European greed and stupidity in the colonies, rather akin to hunting to extinction in Tasmania, both the Tasmanian tiger and the Tasmanian Aborigines.

Unsurprisingly, this duck appears to have moved on and perhaps all but died out, for there are no records of it having bred successfully.

But reliable sightings continued from time to time. Were these the ‘vagrants’ they were passed off as? Or were there small residual populations maintained in out-of-the-way, somewhat safer localities?

It would be interesting to know what the factors were that moved so many white-eyes into New Zealand in the 19th century – or indeed did they? Perhaps they came across in substantial numbers a lot earlier?

Since their breeding is influenced considerably by climatic conditions and they must nest very close to water, perhaps a particularly vicious drought sent them eastwards seeking water, aquatic food and a cooler climate?

Interesting too, to consider their disappearance from New Zealand. Was it entirely due to human intervention?

Shooting on that scale had to have had an impact but it is unlikely to be the only factor. At that stage of our colonial history, introduced predators are not likely to have been well enough established in sufficient numbers – except for rats. In those years there were serious rat plagues that may have contributed to the ducks’ demise. Were we in the grip of a drought? Apparently not.

But in 1886 Mt Tarawera erupted, and it erupted with an uncommon vengeance.

The lakes of the Tarawera region had at various stages contained white-eye populations. And not so very far away were populations on the Waikato lakes.

Naturally when Mt Tarawera spoke, everyone wished to leave town – ducks included. The eruption quite possibly dispersed the duck population far and wide.

Perhaps too, the ash showers may have significantly affected food supply – both terrestrial and aquatic. Continuing earth tremors and general rumbles would certainly have given incentive to move and keep moving. The species are very gregarious, so presumably they might stay together to some degree. But where?

Could they have returned to Australia – against often strong prevailing westerlies? Rather unlikely. Perhaps they went south, but it is unlikely in a

species adapted to at least a temperate climate. Maybe they went eastwards into the vast Pacific. Again there is no substantial evidence to suggest this.

There remains the possibility that they went north and north-east to the Pacific Islands. Interestingly, they have been frequently reported from various island groups.

Or did they simply disperse throughout New Zealand, and never bred much, if at all, for they are known to be reluctant breeders and also wary of human company.

Even in Australia, they are thought to be in some decline in recent years, presumably due to habitat degeneration such as the usual: drainage.However populations are still pretty impressive: during the 1957-58 severe drought in southern NSW about 80,000 white-eyes dropped into Lake Brewster, 50,000 at Barrenbox Swamp and a mere
15,000 at Lake Learmouth (Victoria).

Perhaps now is the time, before numbers do lessen, to reintroduce this species into New Zealand. Whatever the populations, putting your eggs in various, good quality, safe baskets is still a very sound strategy.

Considering the self-introduction and therefore indigenous status of this bird, like the other white-eye or waxeye (tahou) and a handful of other Australian species, perhaps it deserves a little help.

▪ Alan Fielding lives in Masterton and is a Life Member of Ducks Unlimited. He previously taught environmental technology and education at tertiary level and had a wetland, which he developed, at Tokomaru, northern Horowhenua.