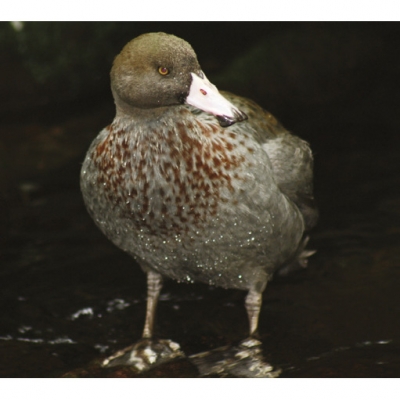 Peter Russell keeps a watchful eye on Whio to make sure the  numbers are kept up and they return as much as possible, to the  areas where they started life.

The past year has been the best to date with 26 ducklings reared and  released back into the wild. This was achieved by three pairs, the Auckland pair produced 11, the pair at Peacock Springs having 10 and the  Orana pair five. These pairs had all been flock mated. Both the Auckland  and Peacock pairs did double clutch which really helps with numbers  produced.

Three pairs at Hamilton, Palmerston North and Staglands that I was hoping would produce, did nothing. I hope they do better in the coming  season.

This season we have flock mated four more pairs that gives pairs to  Otorohanga, Mt Bruce, Queenstown and another pair at Peacock. I was a  bit disappointed with Mt Bruce who took so long in sending male birds to  Peacock that the female in the new pair at Peacock laid a clutch of eggs  without a male.

It was also disappointing that no wild clutches came in last season to keep  on making up more pairs for captive population.

The first release of 10 was at Egmont National Park on the January 29 with Andrew Glaser of DoC coming over and taking staff through putting  transponders in and a video team taking footage of this and the release. We had a group of school children who attended and Andy was in his  glory.

The second release was on the Manganui-a-te-ao and it was good to see  Alison Beath also of DoC come down to put the transponders in. We  released a total of eight birds with two older birds which came from there  as juveniles and have only bred once and hadn’t done anything for the last  three years. It was a great day. Lots of school children.

The third release was on the Tongariro which also went really well with  lots of people and Genesis staff involved. Six birds were released. The last release was back at Egmont on a Saturday so their volunteers  could attend as most of them work during the week. There were four birds plus a duckling I had hand reared and then sent to Peacock Springs  so it would be brought up with other birds.

It has been so much better now with Air New Zealand sponsorship for  moving ducks about and saving costs on breeders and Peacock Springs  when sending for release. It is a bit more work for me but it goes with the  job.

Duckling quality is very good and I am sure that the matting’s we are  doing with eggs that are coming in is paying off with a very good bird for release.

Deaths for the year

There were seven deaths during the year. Two were neonatal and one a 20-year-old male and another 19-year-old male. We also lost 15 males  including one eight-year-old. These males were not in the breeding programme.

The breeding male from Auckland Zoo died after a very good first season. The female is now at Mt Bruce and has been flock mated with the surplus wild males.

Pairs still needed at: 1. Nga Manu, 2. Mt Bruce, 3. Peacock Springs, 4. Kowhai Aviary, 5. Willowbank, 6. Auckland Zoo, and 7. Ron Munro. We need to bring in more clutches this coming season. Releases for next year Egmont wants to carry on releasing next season though we still need to look for new sites. Also returning birds to areas were the clutches of eggs are from.